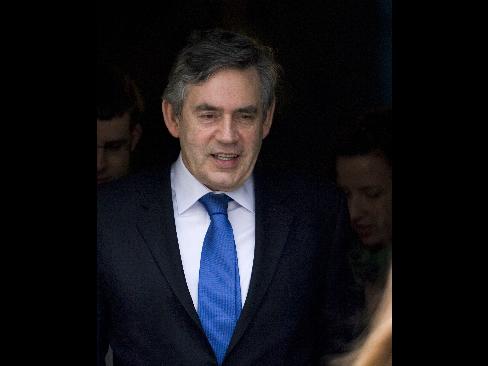 Gordon Brown, U.K. prime minister, leaves number 10 Downing Street to give money to a charitable cause, in London, U.K., on Tuesday, May 5, 2009. Photographer: Chris Ratcliffe/Bloomberg News

June 1 (Bloomberg) — U.K. debt is losing its allure for the biggest owners of gilts as the nation’s worst recession since World War II batters the government’s finances, according to a Bloomberg survey.

Eight of 10 funds, which oversee a combined $2.9 trillion, said they are either more likely to sell than buy British government bonds in the next three months or have no plans to purchase them, the survey conducted last week showed. Two said they were more inclined to buy than sell the securities.

Prime Minister Gordon Brown’s government aims to sell a record 220 billion pounds ($355 billion) of debt in the fiscal year through March 2010 to finance bank bailouts and measures designed to drag Europe’s second-largest economy out of the recession. Standard & Poor’s cut the outlook on Britain’s AAA credit rating to “negative” from “stable” on May 21, citing the country’s growing debt burden.

The U.K. is “spending heavily to rescue the banking system,” said Yuuki Sakurai, general manager of finance and investment planning in Tokyo at Fukoku Mutual Life Insurance Co., which oversees $54 billion. “The rating should be lowered.” Fukoku, one of the money managers surveyed, has no plans to buy gilts this year, he said.

Reduced demand and rising debt issuance from governments around the world may force the U.K. to offer investors higher returns to hold gilts. Germany’s borrowing costs on 10-year bonds rose to the highest this year at an auction on May 20.

London-based Schroder Investment Management Ltd. said last week it cut gilts in its global fund to “near zero,” citing the probability of a credit downgrade.

“The U.K. clearly has a structural problem as it is spending more than it can justify,” said David Scammell, a London-based money manager at Schroder. “The fiscal outlook just doesn’t work.”

Britain’s Debt Management Office couldn’t find enough buyers at a sale of gilts on March 25, the first so-called failed auction since 2002. The debt agency, which normally relies on scheduled auctions to raise money, plans to enlist help from banks to sell 25 billion pounds of debt in eight syndications this fiscal year.

S&P said that Britain’s debt may rise to 100 percent of gross domestic product, a level that would be “incompatible with a AAA rating.” Managers of seven of the funds polled expect Britain to lose the rating, the Bloomberg survey showed.

The U.K. would become the fifth western European Union nation to have its credit grade lowered this year, following Ireland, Greece, Portugal and Spain. The debt burden next year will be 66.9 percent of GDP, exceeding Canada’s 29.1 percent and Germany’s 58.1 percent, according to April 22 forecasts by the International Monetary Fund.

New York-based BlackRock Inc. and Tokyo-based Kokusai Asset Management Co., among the top 10 holders of U.K. debt that make regulatory filings, according to data compiled by Bloomberg, said they are buying gilts maturing in 10 years or less.

“We are long gilts,” said Scott Thiel, the London-based head of European fixed-income at BlackRock. “If yields increase substantially, we’d certainly be a much better buyer of the gilt market.” A long position is a bet that an asset price will rise.

The $47.3 billion Kokusai Global Sovereign Open Fund increased its holdings of U.K. bonds to 6.2 percent of assets, from 4 percent at the start of 2009, according to Masataka Horii, a senior money manager in Tokyo at the fund.

Foreign investors held 216.4 billion pounds, or 34 percent, of total gilts outstanding at the end of last year, according to the Debt Management Office.