And here we have the Zimbabwe School of Economics … again.

The pound will be very soon bad toilet paper. 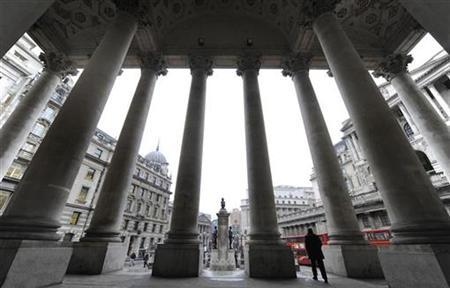 People walk through the Royal Exchange with the Bank of England (R) seen behind in central London January 16, 2009. REUTERS

LONDON (Reuters) – The Bank of England stepped up its campaign to boost the struggling economy, raising the size of its asset purchase programme on Thursday in a surprise move tantamount to printing an extra 50 billion pounds to get banks lending again.

The central bank kept rates at a record low of 0.5 percent as expected, but surprised markets by moving swiftly to reassure them that its scheme to buy up government and corporate bonds with newly-created money would last at least 3 months more.

Sterling lost ground against the euro and dollar on the news, but gilt futures more than halved earlier hefty losses that had taken bond yields back up to levels last seen in February, before Bank Governor Mervyn King had seriously mooted the policy of quantitative easing.

Traders had been worried the Bank would wait until next week’s quarterly Inflation Report, or even next month’s policy meeting, before deciding whether to expand the initial 75 billion pounds of asset purchases, which looked set for completion around the end of this month.

“We are a little taken aback by the decision to increase the quantitative easing target by 50 billion pounds. We had thought it more likely the Monetary Policy Committee would sit and wait to assess the impact of the existing programme rather than expand it right away,” said Philip Shaw, economist at Investec.

“Clearly, committee members have been spooked by some poor backward-looking domestic and international economic data. But the statement also points out that forward looking numbers are showing promising signs.”

The Bank of England’s quantitative easing policy aims to help the economy by ensuring inflation stays close to its 2 percent target even when output looks likely to suffer its worst year since the aftermath of World War Two.

So far, the Bank has spent about 50 billion pounds of the 75 billion pounds it said in March it would spend on government and corporate debt. Chancellor Alistair Darling has authorised the Bank to spend up to 150 billion.

Buying debt with newly created money boosts the money supply and in theory allows banks to lend more freely. It is intended to limit the undershoot in inflation — which fell to 2.9 percent in March — the Bank expects later this year.

“That stimulus should in due course lead to a recovery in economic growth, bringing inflation back towards the 2 percent target. But the timing and strength of that recovery is highly uncertain,” the central bank said.

The Bank added it would continue to keep its quantitative easing policy under review.

The central bank said it saw promising signs that the pace of economic decline in Britain and overseas was starting to moderate, but that weak world demand, higher household saving and bank restructuring would slow recovery.

On the positive side, policy moves by the Bank of England and the government as well as the boost to British competitiveness by the fall in sterling would help growth.

Britain’s economy shrank at its fastest pace since 1979 in the first three months of this year.

However, recent surveys suggest the pace of decline is slowing. Consumer confidence has picked up markedly over the past two months, equity prices have jumped by a fifth and money market strains appear to be easing.