Does $65.5 trillion terrify anyone yet?

As the Obama administration pushes through Congress its $800 billion deficit-spending economic stimulus plan, the American public is largely unaware that the true deficit of the federal government already is measured in trillions of dollars, and in fact its $65.5 trillion in total obligations exceeds the gross domestic product of the world.

The total U.S. obligations, including Social Security and Medicare benefits to be paid in the future, effectively have placed the U.S. government in bankruptcy, even before new continuing social welfare obligation embedded in the massive spending plan are taken into account.

The real 2008 federal budget deficit was $5.1 trillion, not the $455 billion previously reported by the Congressional Budget Office, according to the “2008 Financial Report of the United States Government” as released by the U.S. Department of Treasury.

The difference between the $455 billion “official” budget deficit numbers and the $5.1 trillion budget deficit cited by “2008 Financial Report of the United States Government” is that the official budget deficit is calculated on a cash basis, where all tax receipts, including Social Security tax receipts, are used to pay government liabilities as they occur.

But the numbers in the 2008 report are calculated on a GAAP basis (“Generally Accepted Accounting Practices”) that include year-for-year changes in the net present value of unfunded liabilities in social insurance programs such as Social Security and Medicare.

Under cash accounting, the government makes no provision for future Social Security and Medicare benefits in the year in which those benefits accrue.

“As bad as 2008 was, the $455 billion budget deficit on a cash basis and the $5.1 trillion federal budget deficit on a GAAP accounting basis does not reflect any significant money [from] the financial bailout or Troubled Asset Relief Program, or TARP, which was approved after the close of the fiscal year,” economist John Williams, who publishes the Internet website Shadow Government Statistics, told WND.

Find out what’s behind the chaos at the White House, in the No. 1 best-seller “Obama Nation”

“The Congressional Budget Office estimated the fiscal year 2009 budget deficit as being $1.2 trillion on a cash basis and that was before taking into consideration the full costs of the war in Iraq and Afghanistan, before the cost of the Obama nearly $800 billion economic stimulus plan, or the cost of the second $350 billion in TARP funds, as well as all current bailouts being contemplated by the U.S. Treasury and Federal Reserve,” he said.

“The federal government’s deficit is hemorrhaging at a pace which threatens the viability of the financial system,” Williams added. “The popularly reported 2009 [deficit] will clearly exceed $2 trillion on a cash basis and that full amount has to be funded by Treasury borrowing.

“It’s not likely this will happen without the Federal Reserve acting as lender of last resort for the Treasury by buying Treasury debt and monetizing the debt,” he said.

“Monetizing the debt” is a term used to signify that the Federal Reserve will be required simply to print cash to meet the Treasury debt obligations, acting in this capacity only because the Treasury cannot sell the huge of amount debt elsewhere.

The Treasury has been largely dependent upon foreign buyers, principally China and Japan and other major holders of U.S. dollar foreign exchange reserves, including OPEC buyers purchasing U.S. debt through London.

“The appetite of foreign buyers to purchase continued trillions of U.S. debt has become more questionable as the world has witnessed the rapid deterioration of the U.S. fiscal condition in the current financial crisis,” Williams noted. 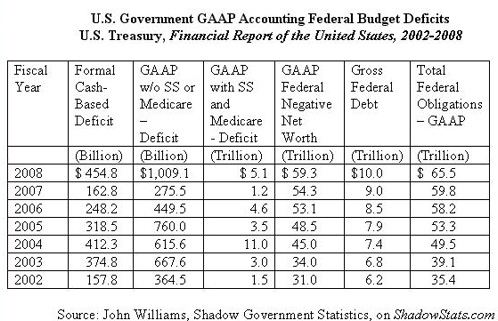 Calculations from the “2008 Financial Report of the United States Government” also show that the GAAP negative net worth of the federal government has increased to $59.3 trillion while the total federal obligations under GAAP accounting now total $65.5 trillion.

“In the seven years of GAAP reporting, we have seen an annual average deficit in excess of $4 trillion, which could not be possibly covered by any form of taxation,” Williams argued.

“Shy of the government severely slashing social welfare programs, federal deficits of this magnitude are beyond any hope of containment, government or otherwise,” he said.

“Social Security and Medicare must be shown as liabilities on the federal balance sheet in the year they accrue according to GAAP accounting,” Williams argues. “To do otherwise is irresponsible, nothing more than an attempt to hide the painful truth from the American public. The public has a right to know just how bad off the federal government budget deficit situation really is, especially since the situation is rapidly spinning out of control.