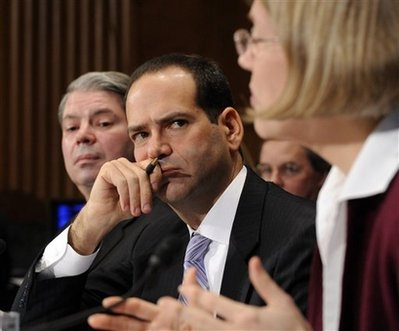 WASHINGTON – The Bush administration overpaid tens of billions of dollars for stocks and other assets in its massive bailout last year of Wall Street banks and financial institutions, a new study by a government watchdog says.

The Congressional Oversight Panel, in a report released Friday, said last year’s overpayments amounted to a taxpayer-financed $78 billion subsidy of the firms.

The findings added to the frustrations of lawmakers already wary of the $700 billion rescue plan, known as the Troubled Asset Relief Program. Congress approved the plan last fall, but members of both parties criticized spending decisions by the Bush administration and former Treasury Secretary Henry Paulson.

Financially ailing insurance giant American International Group, deemed by the Treasury Department to be too big to be allowed to fail, received $40 billion from the Treasury for assets valued at $14.8 billion, the oversight panel found.

The misgivings come as new Treasury Secretary Timothy Geithner is preparing to place the Obama administration’s imprint on the program with a sweeping new framework for helping banks, loosening credit and helping reduce foreclosures. Geithner plans to unveil the changes Monday.

The oversight panel examined 10 transactions, including eight made under a capital purchase program designed to put liquidity into the banks in hopes of easing credit. That money went to banks considered “healthy” financially but in need of capital to make loans.

Two other transactions went to AIG and to Citigroup Inc. under programs designed to help companies that were facing serious financial difficulties.

Overall, the panel and the analysts it retained to conduct the valuation study found that the Treasury used taxpayers’ money to pay $62.5 billion more than the value of assets in the 10 transactions it examined. By extrapolating to the more than 300 institutions that received money, it concluded that the government in effect paid $78 billion more than the actual value of the asset at the time.

“Treasury chose to offer ‘one size fits all’ pricing in order to encourage all institutions to participate, and in so doing disregarded apparent differences in their financial condition,” the report states. “A consequence is that Treasury effectively offered weaker participants greater subsidies than it offered to stronger participants.”

Panel Chairwoman Elizabeth Warren, testifying to the Senate banking committee Thursday, said: “There may be good policy reasons for overpaying, but without a clearly delineated reason, we can’t know that.”

Reacting to the panel’s conclusions, Treasury spokesman Isaac Baker said in a statement: “Treasury’s efforts since the fall prevented a systemwide collapse, but more needs to be done to stabilize the financial sector, increase lending and protect taxpayer dollars.”

He said the plan that Geithner will announce on Monday aims to free up credit, “while strengthening transparency and accountability measures so that taxpayers know where and how their money is being spent and whether it’s achieving real results.”

“I can understand some gap,” he said. “No one is expecting perfection between the price you pay and what you think you’re getting. But that’s a pretty large disparity.”

Another fund watchdog urged the Obama administration to be clearer about the true value of the nearly $300 billion the Treasury has infused into more than 300 institutions through purchases of assets such as preferred stock.

“Treasury needs, in the near term, to begin developing a more complete strategy on what to do with the very substantial portfolio that it now manages on behalf of the American people,” said Neil Barofksy, the special inspector general for the rescue program.