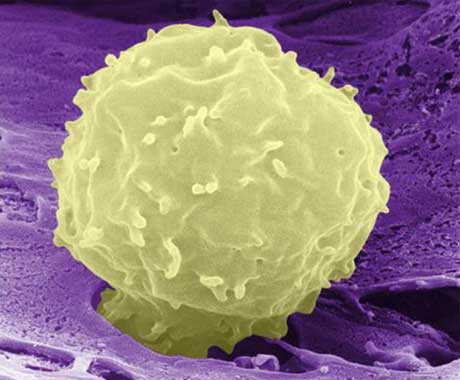 A stem cell emerging from rat bone marrow. By stimulating the release of stem cells after a heart attack, the healing process could be accelerated. Photograph: Imperial College London

A groundbreaking medical treatment that could dramatically enhance the body’s ability to repair itself has been developed by a team of British researchers.

The therapy, which makes the body release a flood of stem cells into the bloodstream, is designed to heal serious tissue damage caused by heart attacks and even repair broken bones. It is expected to enter animal trials later this year and if successful will mark a major step towards the ultimate goal of using patients’ own stem cells to regenerate damaged and diseased organs.

‘This would allow bodies to heal themselves’ Link to this audio

When the body is injured, bone marrow releases stem cells that home in on the damaged area. When they arrive, they start to grow into new tissues, such as heart cells, blood vessels, bone and cartilage.

Scientists already know how to make bone marrow release a type of stem cell that can only make fresh blood cells. The technique is used to collect cells from bone marrow donors to treat people with the blood cancer leukaemia.

Now a team led by Sara Rankin at Imperial College London has discovered a way to stimulate bone marrow to release two other types of stem cell, which between them can repair bone, blood vessels and cartilage. Giving mice a drug called mozobil and a naturally occuring growth factor called VEGF boosted stem cell counts in their bloodstream more than 100-fold.

“This has huge and broad implications. It’s an untapped process,” said Rankin, whose study appears in the US journal Cell Stem Cell. “Suppose a person comes in to hospital having had a heart attack. You give them these drugs and stem cells are quickly released into the blood. We know they will naturally home in on areas of damage, so if you’ve got a broken bone, or you’ve had a heart attack, the stem cells will go there. In response to a heart attack, you’d accelerate the repair process.”

Rankin likens the body’s natural repair mechanism to a village with a single fire engine. When a fire breaks out, the engine makes its way there and starts to hose it down. “What we’re doing is sending signals to the fire station to release a hundred more fire engines, so the impact is much greater,” she said.

Rankin added: “The body repairs itself all the time. We know that the skin heals over when we cut ourselves and, similarly, inside the body there are stem cells patrolling around and carrying out repair where it’s needed. However, when the damage is severe, there’s a limit to what the body can do.

“We could potentially call up extra numbers of whichever stem cells the body needs, in order to boost its ability to mend itself and accelerate the repair process.”

The group hopes to begin trials of the therapy later this year to investigate how effective it is at repairing tissue damage in rodents. “All the evidence suggests these cells will make a significant difference to the natural repair process,” Rankin said.

The therapy might also prove useful in treating patients with immune disorders, such as rheumatoid arthritis. One of the stem cell types released from bone marrow dampens down the immune system, and so could help keep so-called “autoimmune” diseases under control.

A possible danger with some other stem cell therapies in the pipeline is their use of embryonic stem cells. Because these can turn into any type of tissue, there is a risk they could grow into cancer cells when injected into patients. The Imperial group’s treatment uses stem cells that can only grow into blood vessels, bone and cartilage, so the risk of causing cancer is removed.

Paul Fairchild, director of the Oxford Stem Cell Institute at the James Martin 21st Century School , said: “This study brings closer to reality the prospect of tapping into the body’s own resources of stem cells in order to repair diseased or injured tissues. Nevertheless, many questions remain to be answered, such as whether a procedure that releases stem cells from the bone marrow by interfering with their retention and migration will spare their ability to migrate to the very sites of injury or trauma where they are most needed.”

Peter Weissberg, medical director at the British Heart Foundation, which co-funded the research, added: “It has long been known that the bone marrow contains cells that can replace lost or aged blood cells. It now seems increasingly likely that the bone marrow also contains cells that have the capacity to repair damaged internal organs, such as the heart and blood vessels, but that too few of them are released to be effective.

“This research has identified some important molecular pathways involved in mobilising these cells. It may be possible to develop a drug that interacts with these pathways to encourage the right number and type of stem cells to enter the circulation and repair damage to the heart.”