Merrill Lynch has revealed that some of its richest clients are so alarmed by the state of the financial system and signs of political instability around the world that they are now insisting on the purchase of gold bars, shunning derivatives or “paper” proxies. 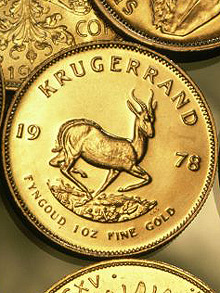 Gary Dugan, the chief investment officer for the US bank, said there has been a remarkable change in sentiment. “People are genuinely worried about what the world is going to look like in 2009. It is amazing how many clients want physical gold, not ETFs,” he said, referring to exchange trade funds listed in London, New York, and other bourses.

“They are so worried they want a portable asset in their house. I never thought I would be getting calls from clients saying they want a box of krugerrands,” he said.

Merrill predicted that gold would soon blast through its all time-high of $1,030 an ounce, and would hit $1,150 by June.

The metal should do well whatever happens. If deflation sets in and rocks the economic system it will serve as a safe-haven, but if massive monetary stimulus gains traction and sets off inflation once again it will also come into its own as a store of value. “It’s win-win either way,” said Mr Dugan.

He added that deflation may prove the greater risk in coming months. “It’s very difficult to get the deflation psychology out of the human brain once prices start falling. People stop buying things because they think it will be cheaper if they wait.”

Merrill expects global inflation to hover near zero, with rates of minus 1pc in the industrial economies. This means that yields on AAA sovereign bonds now at 3pc will offer a real return of 4pc a year, which is stellar in this grim climate. “Don’t start selling your government bonds,” Mr Dugan said, dismissing talk of a bond bubble as misguided.

He warned that the eurozone was likely to come under strain this year as slump deepens. “There is going to be friction as governments in the south start talking politically about coming out of the euro.
I don’t see the tensions in Greece as a one-off. It is a sign of social strain in countries that have lost competitiveness.”