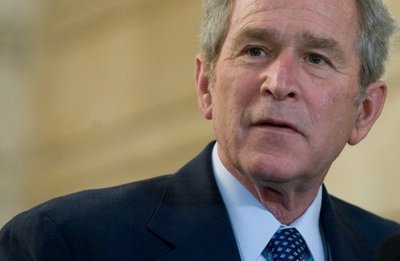 US President George W. Bush made a surprise visit to Afghanistan on Monday, holding talks with President Hamid Karzai and warning of a long struggle ahead to quell insurgent violence. (AFP/Saul Loeb)

As the holiday season commences, it’s worth taking stock of the last gift that President George W. Bush and the 110th Congress have left for U.S. taxpayers.

It’s a package of about $8.7 trillion dollars’ worth of potential taxpayer commitments for loans, guarantees and other bailout goodies for businesses and distressed homeowners.

Amid the tissue paper:

• More than $1.5 trillion in Federal Deposit Insurance Corp. loan guarantees, including a $139 billion assist to the lending arm of General Electric Corp.

• $1.8 trillion in cash, tax breaks and loan guarantees doled out from the Treasury Department to taxpayers, financial institutions and credit companies.

• $300 billion for homeowners from the Federal Housing Authority.

• $25 billion in assistance for auto companies from a program overseen by the Energy Department, which is separate from the bailout proposal that tanked last week in the Senate.

• And $5 trillion worth of new money, loan guarantees and loosened lending requirements from the Federal Reserve Bank.

According to Bianco Research President James Bianco, who crunched these numbers, that amounts to more government aid and assistance than nine other historic bailouts and big government outlays combined.

If you take those three items, add in the adjusted costs of the Race to the Moon, the savings and loan crisis, the Korean War, the Iraq war, the Vietnam War and assistance for NASA, you still get to just $3.92 trillion – not even half of the taxpayers’ exposure today, according to Bianco.

If that weren’t enough to make you want to upgrade your holiday gift list, it’s useful to remember that Congress isn’t done and President-elect Barack Obama’s team hasn’t even started.

They are promising a newer and bigger stimulus package early next year – one that could make last spring’s $168 billion government giveaway to taxpayers (remember that fixer?) look like pocket change.

Asked just how much the taxpayers are on the hook for, Bianco said: “I just say you should use the number infinity, because nobody understands these numbers, and I would include the Treasury secretary and chairman of the Fed in that group.”

There is a bright side, sort of. Only about $2.9 trillion of the government money, loans and guarantees have actually been spent or committed.

And some of the deals are structured with the idea that taxpayers could one day make money off them by selling pieces of companies or the government’s new stake in them.

But that can’t be done until the economy rebounds, something that most economists aren’t yet willing to predict – probably because it would be even more depressing.

Now, all this is not to say that these measures weren’t necessary to save consumers from an even worse fate. That’s a big unanswered question that now will be left to speculators.

But the vast majority of the smart economic crowd, from both sides of the aisle, say the job losses and economic calamity that would have ensued without government intervention today would make the Great Depression look like an economic hiccup.

“If we don’t fix this, it doesn’t matter if we can’t pay for it,” said Heather Boushey, a senior economist at the Center for American Progress. “The problem will only get worse and become harder and even more expensive to fix.”

Meanwhile, she said, unemployment rates could soar abruptly, as they did during the Depression. “Every person who loses a job could also lose a house and health insurance and the ability to pay for college,” she added. “We could lose a generation.”

Given that, it was something of a wonder when Senate Republicans quashed a $14 billion rescue plan last week for domestic automakers.

Republicans had taken a beating on Election Day, in part because of resentment within their own base at the bailout bonanza in Washington.

But the automakers’ request seems a pittance given all the taxpayer cash already flooding the private market.

Part of the answer might have come from an Obama-style Internet campaign launched by FreedomWorks, a grass-roots organization led by former House Majority Leader Dick Armey (R-Texas).

FreedomWorks purchased Google search ads that popped up any time someone clicked for information about the auto bailout. The ad urged people to oppose the measure.

Thomas Keeley, the organization’s online advertising specialist, said the ad helped them generate nearly 100,000 messages to Congress. “We did very well, especially given the limited time we had on this,” he said.

The auto industry wasn’t idle. General Motors and Ford also took out Google search ads urging support for the package – a message that would have been tough to deliver in a big television ad campaign.

The cyberspace campaigns are likely a harbinger of how future bailout battles will be waged once Obama takes office with an e-mail list of more than 10 million supporters.

Already, Peter Greenberger, who’s heading up Google’s new issues advocacy sales team, says he’s warning interest groups that may take a stand on either side of the Democrats’ expected trillion-dollar stimulus package not “to organize a 20th-century advocacy campaign against a 21st-century administration.”