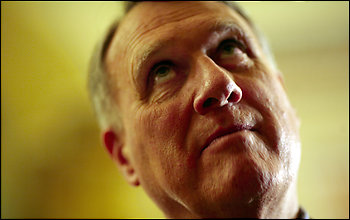 Immigration and civil liberties groups condemned a new U.S. government policy to collect DNA samples from all noncitizens detained by authorities and all people arrested for federal crimes.

Congress authorized the expansion in 2005, citing the power of DNA as a tool in crime solving and prevention.

The FBI created its National DNA Index System in 1994 to store profiles of people convicted of serious violent crimes, such as rape and murder, but the system has been expanded repeatedly, first to include all convicted felons, then misdemeanants and state arrestees. The data bank contained more than 6.2 million samples as of August, and officials estimate that 61,000 cases have been solved or assisted using DNA.

The change could add as many as 1.2 million people a year to the national database, U.S. officials said. Supporters equate DNA collection to taking fingerprints or photographs at the time of booking.

“We know from past experience that collecting DNA at arrest or deportation will prevent rapes and murders that would otherwise be committed,” said Sen. Jon Kyl (R-Ariz.), who authored that part the legislation.

U.S. officials said that probable cause that a person has committed a crime or indications that he is an illegal immigrant subject to removal from the country are appropriate standards for collecting DNA. But Barry Steinhardt, director of the American Civil Liberties Union’s technology and liberty project, said the change “turns the presumption of innocence on its head.”

Charles H. Kuck, president of the American Immigration Lawyers Association, said the U.S. rule “casts civilly detained immigrants as criminals, requiring them to submit to DNA testing even in cases where there is no suggestion of any criminal violation.”

The incoming Obama administration also will have to decide whether to make it a priority to expand the DNA database or process a backlog of samples submitted by people already convicted of crimes, he said.

This month, the European Court of Human Rights unanimously ruled that a British policy to collect fingerprints and DNA of all criminal suspects, including those later deemed innocent, violated privacy rights.