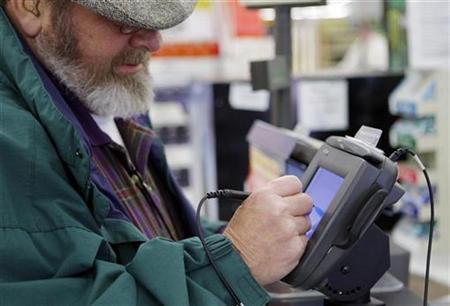 Michael Lipsitz signs his credit card bill for the groceries he purchased at the WalMart in Crossville, Tennessee March 21, 2008. REUTERS/Brian Snyder

(Reuters) – The U.S. credit-card industry may pull back well over $2 trillion of lines over the next 18 months due to risk aversion and regulatory changes, leading to sharp declines in consumer spending, prominent banking analyst Meredith Whitney said.

The credit card is the second key source of consumer liquidity, the first being jobs, the Oppenheimer & Co analyst noted.

“In other words, we expect available consumer liquidity in the form of credit-card lines to decline by 45 percent.”

Bank of America Corp, Citigroup Inc and JPMorgan Chase & Co represent over half of the estimated U.S. card outstandings as of September 30, and each company has discussed reducing card exposure or slowing growth, Whitney said.

Closing millions of accounts, cutting credit lines and raising interest rates are just some of the moves credit card issuers are using to try to inoculate themselves from a tsunami of expected consumer defaults.

A consolidated U.S. lending market that is pulling back on credit is also posing a risk to the overall consumer liquidity, Whitney said.

Mortgages and credit cards are now dominated by five players who are all pulling back liquidity, making reductions in consumer liquidity seem unavoidable, she said.

“We are now beginning to see evidence of broad-based declines in overall consumer liquidity.”

“Already, we have witnessed the entire mortgage market hit a wall, and we believe it will, for the first time ever, show actual shrinkage over the next few months,” she wrote.

The credit card market will be 18 months behind the mortgage market and will begin to shrink by mid-2010, Whitney said.

Whitney also expects home prices to continue falling another 20 percent hurt by lower liquidity. They are down 23 percent from their peak, she said.

“In a country that offers hundreds of cereal and soda pop choices, the banking industry has become one that offers very few choices,” Whitney wrote in a note dated November 30.

She also said credit lines to consumers through home equity and credit cards had been cut back from the second-quarter levels.

“Pulling credit when job losses are increasing by over 50 percent year-over-year in most key states is a dangerous and unprecedented combination, in our view,” the analyst said.

Most of the solutions to the situation involve government intervention, and all of them require more dilutive capital to existing lenders, she said.

“Accordingly, we continue to be cautious on our outlook on US banks.”

In a column in the Financial Times, Whitney suggested four adoptable changes to make a difference.

The first would be to re-regionalize lending, which has gone from “knowing your customer” or local lending, to relying on what have proven to be unreliable FICO credit scores and centralized underwriting, due to the nationwide consolidation since the early 1990s, she wrote in the column.

Expanding the Federal Deposit Insurance Corp’s guarantee for bank debt will also help as the banks need to know they can access reasonably priced credit for an extended period to continue to extend new credit lines, she wrote in the column.

Whitney also advised delaying the introduction of new accounting rules, which would bring off-balance-sheet assets back on balance sheet, until 2011 or 2012, as the primary assets that will come back are credit card loans.

Whitney suggested amending the proposal on Unfair and Deceptive Lending Practices that is set to be adopted in 2010, saying restricting lenders’ ability to reprice an unsecured loan will cause them to stop lending or to lend less.