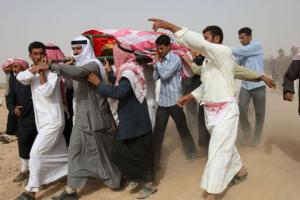 Senior US officials claimed last night that the head of a Syrian network responsible for smuggling foreign fighters, weapons and cash into Iraq had been killed in Syria during a raid by US special forces that sparked strong condemnation from Damascus.

The Syrian foreign minister, Walid al-Moualem said the raid had killed eight civilians and was an act of “criminal and terrorist aggression.” Speaking at a news conference in London, he warned that Damascus would defend itself against any such future attack.

Sunday’s raid, 10km from the Iraqi border, took place in daylight and therefore was “not a mistake,” he said.

The rare attack into Syria marks an unexpected expansion of the war in Iraq and comes as the level of fighting drops to its lowest level for four years.

“We are taking matters into our own hands,” said a US officer in Washington, confirming that American commandos had entered Syria on Sunday evening to attack a network of guerrillas linked to al-Qa’ida.

A US counter-terrorism official claimed that the target of the raid was an Iraqi smuggler called Abu Ghadiya who enabled fighters to cross the Syria-Iraq border. One official said the man had been killed in the compound which had come under attack.

He said Abu Ghadiya was the nom de guerre of Badran Turki Hisham al-Mazididih, a native of Mosul and an aide of al-Qa’ida’s Iraqi leader, Abu Musab al-Zarqawi, who was killed two years ago. The official told the Associated Press that Abu Ghadiya had been the head of the single most important foreign fighter cell that had bedevilled Iraq since the US invasion in 2003.

Syria said that four US helicopters had carried out the raid on a construction site near the Syrian village of Sukkariyeh, 8km from the Iraq border.

Eight men had been killed and two wounded, local officials said. TV images showed a small fenced farm and a truck riddled with bullet holes. There was also a building site and a tent with food and blankets. Spent bullets were scattered around.

In Baghdad the Iraqi government spokesman Ali al-Dabbagh said, justifying the raid, that it was launched against “terrorist groups operating from Syria against Iraq”, including one which was responsible or the deaths of 13 police recruits. He said: “Iraq had asked Syria to hand over this group, which uses Syria as a base for its terrorist activities.” It is not clear that the US informed the Iraqi government before making its attack.

In Sukkariyeh, a villager named Jumad Ahmad al-Hamad said he had seen four helicopters, two of which landed. “Shooting then started and rang out for 10 minutes.” When the helicopters had left, he and other villagers had gone to the site and found the bodies of his uncle, Dawoud al-Hamad, and four of his uncle’s sons.

The area is near the Syrian border-crossing of Abu Kamal. It is on the Euphrates river and the main road from Iraq to Syria. It has been used by insurgents entering Iraq since the US invasion and it is not clear why the US military decided to attack it now.

Mr al-Moualem, said that Syria would ask the US and Iraq to investigate the attack. He said that the US charge d’affaires had told the Syrian government she had “no information”.

In response to American charges that al-Qa’ida fighters were still crossing into Iraq from Syria, Mr al-Moualem said the US had never provided evidence to back up the claims.

Villagers in Sukkariyeh buried their dead yesterday, chanting anti-American slogans and carrying banners reading: “Down with Bush and the American enemy.”

Iraqi leaders have long maintained that al-Qa’ida could not operate in Syria without the powerful Syrian intelligence service knowing what they were doing. Top Iraqi officials say they can confirm this from personal experience because many of them, such as the prime minister, Nouri al-Maliki, were based for many years in Syria before the fall of Saddam Hussein in 2003.

Washington initially refused to confirm or deny reports of the attack but, later, an official told Reuters: “It was a successful operation. He [Ghadiya] is believed to be dead. He had knowledge of many of the so-called ‘rat lines’ or smuggling routes.”

President Bush assented to carrying the war against America’s enemies in the Middle East by backing covert cross-border operations in a presidential finding earlier this year. This secret directive, for which Congress made an outlay of $300m, promised backing for covert attacks by non-US forces from Lebanon to Afghanistan.

The timing of the raid is unexpected as Syria has been more co-operative with the US. In the early stages of the war in Iraq, the Syrian government believed that if the US succeeded in establishing its hegemony in Baghdad, it would try to remove the anti-American governments in Syria and Iran.

It also felt that the US and its allies were undermining its position in Lebanon. But the US failures in Iraq and Syria’s stronger position in Lebanon has meant that Syria is now warier of anti-American insurgent groups in Syria. In the late 1970s and early 1980s, the Baathist regime was the target of extreme Sunni fundamentalists. The US and the Iraqi government have made pinprick attacks against each other in the past.

Syria blamed a bomb attack in Damascus earlier this year on Iraq, saying that the GMC truck containing the explosives had crossed the border from Iraq. All Syrian personnel at border posts were dismissed for failing to detect it. Officially, Syria denies it is a haven for insurgents. The interior minister, Bassam Abdel Majeed, said Damascus “refuses to be a launching pad for threats against Iraq.”

The US is likely to pay a heavy political price for the cross-border raids in terms of Syrian and Pakistani anger, but government retaliation is not likely in either case. A raid into Iran would be different; the Iranians have retaliated swiftly for attacks on their personnel in Iraq. The raid may also intensify Iranian hostility to the Iraqi-US Status of Forces Agreement. “It will be used against the agreement and will give the Iranians reason to increase their interference against [it],” said the Iraqi political veteran Mahmoud Othman.

“The neighbouring countries now have good reason to be concerned about the US presence in Iraq.”