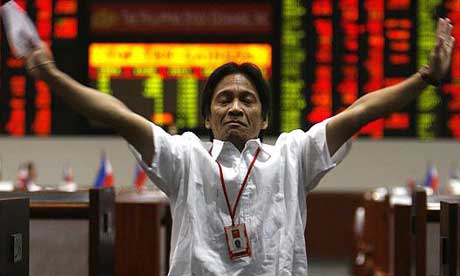 A trader at the Philippines stock exchange as business is halted. Photograph: Cheryl Ravelo/Reuters

Stockmarkets around the world crashed again today as the prospect of a deep worldwide recession continued to haunt investors.

Fears that the financial crisis is spreading to emerging nations sparked another day of panicky selling, despite speculation of another round of interest rate cuts to try to stimulate the global economy,

As the current crisis sparked by the failure of Lehman Brothers entered a seventh week, Japan’s Nikkei index fell 6.4% to its lowest level since 1982, extending its recent slump. It has now lost 20% of its value in the last week.

Hong Kong also saw shares routed, with the Hang Seng index plunging almost 12% in late trading – putting it on track for its biggest daily fall since 1997. And the Chinese stockmarket tumbled over 6%, bringing more pain to small investors who have watched the Shanghai Composite index fall 70% from last year’s peak.

With India’s stockmarket losing 8%, shares across Europe are also expected to fall sharply when trading begins. The Dow Jones index is tipped to fall by another 400 points, or 5%, later today.
(The Dow fell only 2,42% today.)

The latest sharp falls, following last week’s heavy losses, showed that investors have little confidence that the world’s leaders can stave off a painful economic contraction.

In Japan, Canon became the latest blue-chip company to slash its profit forecasts. It blamed the strength of the yen, which has pushed up the cost of its exports overseas.

The soaring yen is such a concern that the G7 group of industrialised nations expressed concern over its “volatility”, but this failed to stop the currency strengthening again.

The continuing turmoil in the financial markets has left many smaller countries facing a cash squeeze. The International Monetary Fund is drawing up emergency plans for a new short-term loan facility to help these economies, and Ukraine and Hungary both accepted loans from the IMF yesterday.