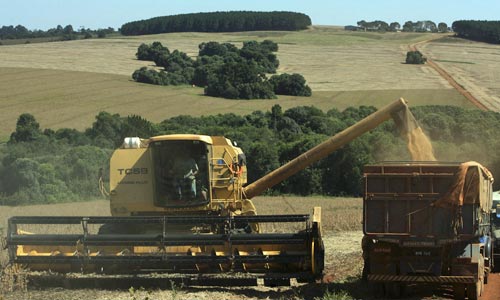 Some even fear that Latin America’s most prolonged growth spurt in years could be over, ushering in an era of renewed austerity.

“We’re sailing without a compass,” said Nilson Wirth Monteiro, a consultant with Link Investments in Sao Paulo, Brazil, the epicenter of Latin America’s largest economy. “There’s no compass to indicate how commodities and global markets will behave.”

Leaders such as Brazilian President Luiz Inacio Lula da Silva initially boasted that their nations were inoculated against the “jazz effect” — as Argentine President Cristina Fernandez de Kirchner mockingly dubbed the spreading crisis in an address at the United Nations.

Argentina, one of the world’s leading producers of soybeans, corn and wheat, could lose as much as $6 billion next year in agricultural exports, according to one estimate. Many governments, including Brazil’s, may have to rethink ambitious plans meant to improve infrastructure and reduce poverty.

“Latin American leaders have in a few days gone from preoccupation with the phenomenon happening elsewhere in the world to abject fear,” noted the Washington-based Council on Hemispheric Affairs, in a report released Friday. “There is a growing nervousness that once again Latin America cannot escape the consequences of the globalized financial connections that run through the United States.”

With prices down from record highs, alarmed farmers who covered vast tracts of pampas and rain forest in Brazil, Argentina, Paraguay and Bolivia with soybeans are wondering whether the boom has turned to bust. Anxiety has replaced the rural bluster.

It has been a traumatic turn of events for an affluent rural class that had grown accustomed to reveling in soaring futures prices on their BlackBerries even as they navigated tractors through shimmering expanses of soybeans.

“We don’t know where we’re headed,” said Alejandro Giordani, a soy producer in Argentina’s Santa Fe province. “We don’t have any certainty about the price of soybeans, and that scares us, especially now in the planting season.”

Commodities as diverse as beef from Argentina, iron ore from Brazil and zinc from Bolivia had reached new highs, sparked in part by sales to China and India. Now anxious producers cross their fingers in hope that the economic meltdown will not cause a free-fall in demand from Asia.

“We know that millions of people will continue entering the formal economy in emerging economies like China and India,” Giordani said. “That gives us some hope.”

Some countries are clearly better prepared than others.

Chile has socked away $20 billion in windfall export earnings from copper. Brazil has a highly diversified economy, with a huge domestic market and $200 billion in reserves.

Countries such as Brazil and Argentina are much less intertwined with U.S. markets than Mexico and those of Central America, where U.S. trade and remittances from immigrants in the United States are economic pillars. Argentina’s status as a chronic investment risk could actually work in its favor, because there is relatively little foreign money poised to flee.

“I think Argentina will be OK, as well as Brazil,” said Mark Weisbrot, co-director of the Center for Economic and Policy Research in Washington, which released a study on the possible effects of a U.S. recession on Latin America that noted that in 2007 trade with the United States represented less than 2% of the gross national products of Argentina and Brazil.

In contrast, U.S. trade in 2007 accounted for 21% of Mexico’s gross domestic product, 15% of Venezuela’s GDP (mostly from oil), and about 5% of the GDPs of Peru, Chile and Colombia.

“But,” Weisbrot said, “everything depends on how badly the rich countries screw up and how much the world economy slows.”

The rampant uncertainty has put a halt, for now, to the prospect of unending good times through the exports of foodstuffs and minerals.

“The mood is guarded, and there is a great apprehension in Brazil, just like in the United States, that the worst has yet to come,” said David Fleischer, at the University of Brasilia. “Unfortunately, no one knows where the bottom of the barrel is yet.”

Andrés D’Alessandro of The Times’ Buenos Aires Bureau and special correspondent Marcelo Soares in São Paulo contributed to this report.