As the reputation of the controversial militant-linked White Helmets continues to crumble, even the US State Department seems to be having second thoughts about supporting the group, reportedly placing a freeze on its funding.

The State Department’s support for the White Helmets is “under active review,”according to a CBS News report. The group reportedly hasn’t received funding in weeks, but neither has it received formal confirmation that Washington’s financial assistance has come to a complete halt. This would mean a significant blow for the group, as the money accounts for about one-third of the White Helmets’ overall funding.

An internal State Department document cited by CBS said that its Near East Bureau needed confirmation from President Donald Trump’s administration by April 15 in order to approve funding for the White Helmets. If that wasn’t received, the department would initiate “shut-down procedures on a rolling basis.”

Online reaction to the report has been mixed, with some continuing to hail the work of the White Helmets. Among them was Samantha Power, the former US ambassador to the UN.

No where to be found pic.twitter.com/AyQ4b94zZa

According to the Russian military, al-Nusra Front terrorist group brought more than 20 containers with chlorine to a village in Idlib.

The Russian center for Syrian reconciliation stated that it had received information from a local resident that al-Nusra Front terrorists and White Helmets were preparing to stage a provocation, involving chemical weapons’ use, in Syria’s Idlib province in order to blame Damascus for the attack on civilians.

“On the evening of February 12, the Russian center for reconciliation received a telephone call from the resident a settlement in the Idlib province, informing about a forthcoming provocation, using poisonous chemicals, to air it on a foreign television channel. According to the person, on the afternoon of February 12, the al-Nusra Front militants delivered brought more than 20 bottles of chlorine and personal protective equipment on three cars,” the Russian military stated.

START – The unsustainability of the press and media…
02:50 – All information for publication to be provided by government…?
04:08 – Newsweek: losing large numbers of senior staff
05:49 – MainStream Media setting itself up as the arbiter of truth…
07:30 – Guardian filtering the truth…running protection rackets
11:56 – Syria: ‘reported’ chemical weapons attack but without evidence
19:17 – Truth in MainStream Media…? Propaganda is more important
19:30 – Br(exit): British defence being decimated…EU to assume control
25:05 – Eurocorps: Britain to be fully integrated into EU military – no exit
29:48 – Nationalities of EU forces to be mixed at lowest possible level
30:47 – EU military ‘at disposal of NATO’ Orders will come from Brussels
36:58 – House of Commons: European Defence: where is it heading…?
43:28 – More EU federalisation: EU centralised banking and debt agency
46:11 – Met Police child abuse whistleblower: awareness walk appeal

“I don’t have the evidence,” Mattis said. “What I am saying is that other groups on the ground – NGOs, fighters on the ground – have said that sarin has been used, so we are looking for evidence.”

This week the American public was once again bombarded by fresh headlines alleging the Syrian government under President Bashar al-Assad gassed its own people. And in predictable fashion the usual threat of US military force soon followed.

Except of course rather than “alleging” a chemical incident, all the usual suspects from CNN pundits to State Department bureaucrats to Pentagon officials in typical fashion are opting for the simpler “Assad did it” narrative. State Department spokesperson Heather Nauert stated Thursday, “Russia is making the wrong choice by not exercising its unique influence. To allow the Syria regime to use chemical weapons against its own people is unconscionable. We will pursue accountability.” 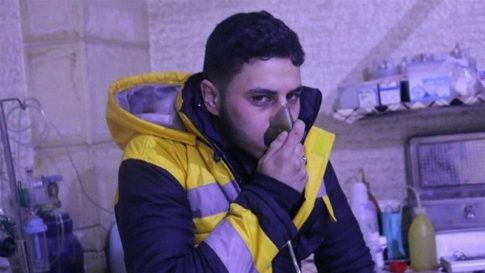 The White Helmets published this photo on Thursday, claiming that its “volunteer was suffocated by the chlorine gas attack”. It appears that this is the “NGO” Defense Secretary Jim Mattis referenced on Friday to say “open sources” say Assad is using chemical weapons.

Nauert’s statement was a repeat of talking points from last week’s chemical attack claims, wherein both she and Secretary of State Rex Tillerson ultimately blamed Russia. But like with other recent chemical attack allegations, the claims couldn’t be more vague or poorly sourced, yet was still enough for U.S. officials to issue more direct threats of US military action against Assad.

“Seems White Helmets is a clever psyop, presumably by the Rothschild owned CIA.

Just when you thought they were slowing down following their failure to win a Nobel Peace Prize in October, the US-UK backed ‘NGO’ dubbed the White Helmets, continue to produce an unprecedented amount of western-oriented war propaganda.

Created out of militants who invaded Aleppo, the Western-funded White Helmets is a terrorist support group fraudulently masquerading as a humanitarian organization to undermine Syrian government, says independent researcher and journalist Vanessa Beeley.

The propaganda from the rebel-held eastern Aleppo is produced by a number of organizations and individuals who are sponsored by the West, with the White Helmets being the largest among them, Beeley told RT. But the White Helmets are not the heroes that the mainstream media is trying to make of them.

“This organization is a fraudulent shadow-state construct created by NATO to simply propagate the propaganda that will demonize Assad’s government and also demonize Russian legal intervention in Syria,” said the journalist, who recently returned from Syria.