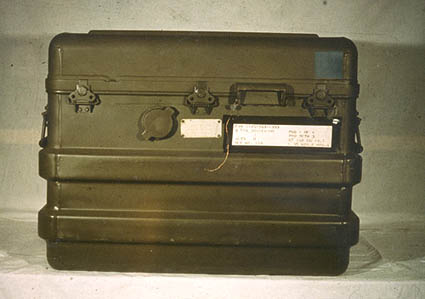 Special Atomic Demolition Munitions (SADMs) were designed to be a portable nuclear weapon that a single soldier could carry on his back.

Open sources describe the Special Atomic Demolition Munition (SADM) as a United States Navy and Marines project that was demonstrated as feasible in the mid-to-late 1960s, but was never used. US Army Special Forces historians would probably take exception to the program description, at least up to, and fortunately, not including, the “never used” part.

The project, which involved a small nuclear weapon, was designed to allow one individual to parachute from any type of aircraft carrying the weapon package and place it in a harbor or other strategic location that could be accessed from the sea. Another parachutist without a weapon package would follow the first to provide support as needed.

Read moreMini Nukes: Who Owns All The Suitcase Bombs?

Economy Minister Naftali Bennett, meanwhile, said that Israel was not obligated to adhere to the agreement reached with the Iran, “to a deal that endangers its existence.”

The State of Israel has the right to defend itself and is capable of doing so, Bennett said in an interview with Army Radio, warning that if Iran gets a nuclear bomb, it meant that Saudi Arabia and Syria could also, setting in motion the chance of a fully nuclear Middle East.

“The bad deal that was signed gives Iran exactly what it wanted – a serious lessening of sanctions as well as preserving the most significant parts of its nuclear program,” Bennett added. “If in another five years a suitcase nuke explodes in New York or Madrid, it will be because of the deal that was signed this morning. There’s a long path ahead, and we will continue to act on all levels.”

A suitcase nuke exploding in New York or Madrid?

Who would be stupid enough to do that? Certainly not Iran.

“Iran has not started a war in over 300 years.”
(Source: Veterans Today)

In the later 1990’s Australian television aired a documentary that showed of 132 “one kiloton” suitcase nuclear weapons Russia had, only 48 were accountable. That meant 84 nuclear suitcase bombs were ‘out there’ some where. U.S Congressman Curt Weldon is shown in the clip heading the search for the very portable missing 84 nuclear weapons. This was all before the attacks on America later in September 11, 2001.