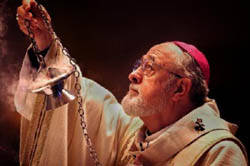 In a 1993 deposition, Weakland admitted destroying copies of the reports in his office, according to a partial transcript of the deposition released by Survivors Network of those Abused by Priests.

Peter Isely, SNAP’s Midwest director, turned over the partial transcript, as well as portions of the logs to which Weakland was referring, to Milwaukee County District Attorney John Chisholm and asked him to review them for any possible criminal violations. Chisholm accepted the records and promised a thorough review.

The 16-year-old deposition documents have come to light during the discovery process in more than a dozen civil fraud lawsuits filed against the Milwaukee archdiocese.