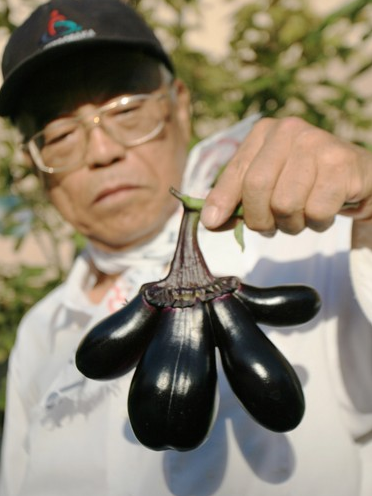 It’s a common type of eggplant called Chunaga nasu. One eggplant is splited into four parts.

Agricultural department of Osaka government comments, it may be due to the temperature and nutrition in soil when the flower bud was growing. It’s common to see the conjoint eggplant of two parts, but it’s rare to see the one of four parts.

OSAKA – Osaka Mayor Toru Hashimoto, who recently clashed with city employees and human rights lawyers over his “tattoo inquisition,” has disturbed commentators again this week with his comments about human rights and personal privacy.

At a meeting attended by 22 newly appointed ward mayors in Osaka on Monday, Hashimoto reportedly told attendees, “I want you to consider your lifestyle and behavior differently now than before you became a public servant,” TV Asahi reported.

“I want each of you to see yourself as a person who now has no personal privacy and no fundamental human rights. I won’t investigate what you did before you became a public servant; the battle begins once you take on the position,” he told the successful applicants, TV Asahi reported.

The ward mayors are due to take office in August.

On the regular press conference of Tokyo mayor on 2/24/2012, it turned out that 4 major Japanese corporations are moving the head offices from Tokyo to Osaka.
The companies are

It’s not only radioactive debris but also daily garbage from your house that emits radiation when it’s burnt.

This is the comparison of the cesium contained in incinerated ash in Tokyo and Osaka.

The data of Osaka is in early September, which is more likely to be contaminated. (“不検出”=ND)

It means the daily garbage from kitchen, living room, garage, and the garden contains more cesium in Tokyo.

Traces of radioactive material blown far from the troubled Fukushima Daiichi nuclear power plant have been detected in the western Japanese city of Osaka.

Osaka’s Institute of Public Health announced on Thursday that tiny amounts of cesium-134 and cesium-137 were found in samples collected from its rooftop between April 1st and May 2nd.

The institute has collected rain and dust samples for its monthly analysis for radiation.

It says it was the first-ever detection of cesium-134, and that levels of cesium-137 were 100 times higher than usual, concluding that the materials probably come from the Fukushima plant.

The institute says that a year’s exposure to those levels of radiation would be less than one 10-thousandth the amount found occurring naturally, and has no impact on human health.