– Italy’s Renzi resigns as head of Democratic Party after defeat in general election:

The leader of Italy’s Democratic Party, Matteo Renzi, has stepped down after his party suffered a heavy defeat in the Sunday’s general election.

A center-left bloc led by the ex-prime minister’s party scored some 23 percent, according to the election results. It now trails the center-right bloc of Silvio Berlusconi’s Forza Italia and the Euroskeptic Lega Nord as well as the anti-establishment Five Star Movement.

“I will obviously step down as leader of the Democratic Party,” Renzi told reporters in Rome, the Italian capital, as cited by AFP.

To summarize, this is what has happened so yet another major blow to the European political status quo:

“The experience of my government ends here,” Renzi said in a televised address to the nation after early voting results suggested his ‘Yes’ camp may have lost the referendum by as much as 20 points.

Several years ago, we were the first to point out the true “elephant in the room”, namely Deutsche Bank’s $75 trillion in derivatives which as we said at the time was about 20 times bigger than Germany’s GDP, and 5 times bigger than the entire economic output of the Eurozone.” 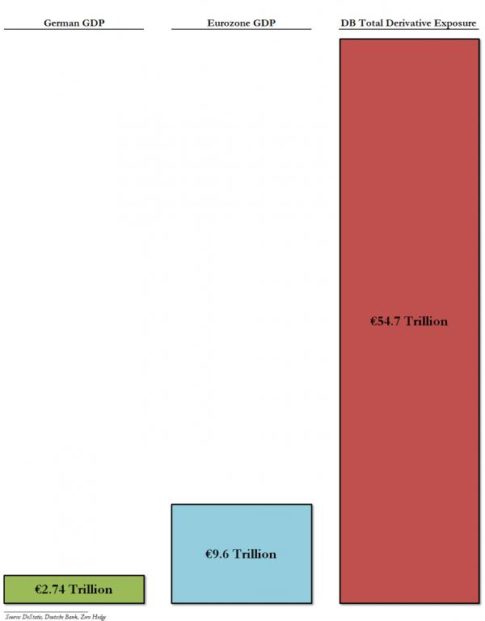 This was largely ignored by the “experts” because why bring attention to something which is fundamentally a devastating break in the narrative that “Europe is fine” and the financial crisis is now contained.

Fast forward to today when Europe is once again not fine, only this time one can’t blame Europe’s problems on Greece (instead the same “experts” are trying to blame everything in Brexit), when in a surprising admission of reality, none other than Italy’s prime minister Matteo Renzi, “went there” and slammed Deutsche Bank as the true “derivative problem” facing Europe.