– Two LAPD cops jailed for 25 years each for raping multiple women – including informants and suspects – while on duty, with one acting as lookout and the other assaulting a victim in their car:

Two Los Angeles police officers will spend the next 25 years behind bars after pleading no contest to sexual assault charges where the pair attacked women who were either acting as informants or were recently arrested on drug charges.

The pair was charged with sexually assaulting multiple women – with one officer committing the attack in their unmarked squad car as the other served as a lookout.

Officers James Nichols, 46, and Luis Valenzeula, 45, both entered no contest pleas on charges of forcible rape and forcible oral copulation.

Edit: To address comments: No, I did not edit this. This is recorded with my cellphone. This was recorded by reporter Carter Evans. It is not radio chatter that is being heard. He says earlier in the broadcast, (which I can also upload) that he is speaking to them via his speakerphone on the ground from the middle of the shootout, and the cops can also be heard telling him “get the fuck out of here pal”. The timestamp of this event is ~1:35pm.

Charred human remains have been found in the burned cabin where police believe fugitive ex-cop Christopher Dorner was holed up after trading gunfire with law enforcement, authorities said.

If the body is identified to be Dorner’s, the standoff would end a weeklong manhunt for the ex-LAPD officer and Navy Reserve lieutenant who is believed to be responsible for a string of revenge-fueled shootings following his firing by the Los Angeles Police Department several years ago. Four people have died, allegedly at Dorner’s hands. 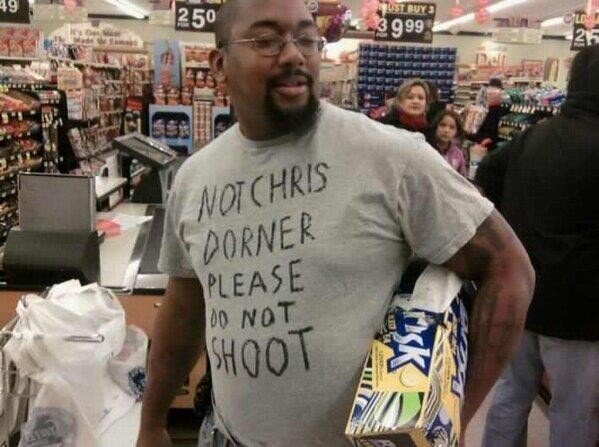 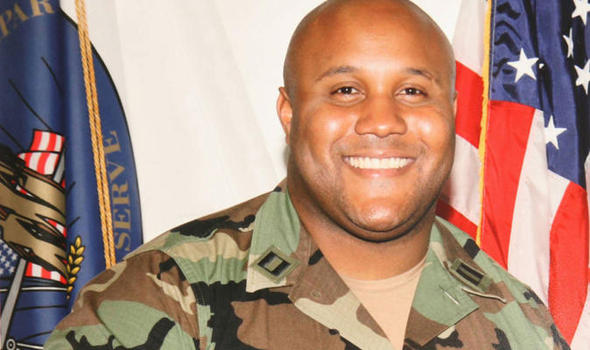 We were hoping to evade coverage of the latest mass distraction du jour, that of the former LAPD officer Chris Dorner who recently went rogue following a three man murder spree and who has vowed to kill again as per his 6,000 word manifesto, but the US government had made it impossible following confirmationthat the search for Dorner is now the first official drone-hunt in US history.

Yesterday, as a task force of 125 officers, some riding Snowcats in the rugged terrain, continued their search, it was revealed that Dorner has become the first human target for remotely-controlled airborne drones on US soil.

A senior police source said: “The thermal imaging cameras the drones use may be our only hope of finding him. On the ground, it’s like looking for a needle in a haystack.”

Asked directly if drones have already been deployed, Riverside Police Chief Sergio Diaz, who is jointly leading the task force, said: “We are using all the tools at our disposal.”

The use of drones was later confirmed by Customs and Border Patrol spokesman Ralph DeSio, who revealed agents have been prepared for Dorner to make a dash for the Mexican border since his rampage began.

He said: “This agency has been at the forefront of domestic use of drones by law enforcement. That’s all I can say at the moment.”

And once Dorner is found by remote-control, it will be again up to drones to secure his “elimination.” If for no other reason than to perform a ground test of just how the recently enacted drone-facilitated extermination of US citizens sits with various instances of the US judicial system.

More than 100 police officers were going door-to-door and searching for new tracks in the snow in hopes of catching suspected cop-killer Christopher Dorner overnight in Big Bear Lake, Calif., before he strikes again, as laid out in his rambling online manifesto.

Police late Thursday night alerted the residents near Big Bear Lake that Dorner was still on the loose after finding his truck burning earlier in the day.

San Bernardino County Sheriff’s spokeswoman Cindy Bachman said authorities can’t say for certain that he’s not in the area. More than half of the 400 homes in the area had been searched by police as of late Thursday. Police traveled in two-man teams.

Bachman urged people in the area not to answer the door, unless they know the person or see a law enforcement officer in uniform.

BIG BEAR LAKE, Calif. — A police officer and a pair of soon-to-be newlyweds were dead.

Another officer, riddled with bullets, was in intensive care.

Two more police were shot at but got away, one of them grazed by gunfire. Two innocent and uninvolved women were shot by police who feared a dangerous suspect.

And despite a massive manhunt that touched three states and Mexico, the heavily armed ex-Los Angeles police officer believed behind the rampage, who promised in his rambling writings to bring “warfare” to police and their families, remained free. 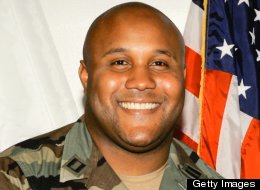 In this handout picture provided by Los Angeles Police Department, the alleged suspect Christopher Jordan Dorner is seen on February 7, 2013 in Los Angeles, Calif. (Photo by LAPD via Getty Images)

I know most of you who personally know me are in disbelief to hear from media reports that I am suspected of committing such horrendous murders and have taken drastic and shocking actions in the last couple of days. You are saying to yourself that this is completely out of character of the man you knew who always wore a smile wherever he was seen. I know I will be villified by the LAPD and the media.

Unfortunately, this is a necessary evil that I do not enjoy but must partake and complete for substantial change to occur within the LAPD and reclaim my name. The department has not changed since the Rampart and Rodney King days. It has gotten worse. The consent decree should never have been lifted. The only thing that has evolved from the consent decree is those officers involved in the Rampart scandal and Rodney King incidents have since promoted to supervisor, commanders, and command staff, and executive positions.

Black Friday is a day for burning off those Thanksgiving calories with some intense Christmas shopping. But for the Los Angeles Police Department, it’s become a day of surveillance, crowd control and crime-suppression tactics.

Helicopters will buzz above some shopping centers, and below, a cavalry of LAPD officers will patrol on bikes and horses. From store rooftops, officers will scan the crowds below looking for unruly behavior. Electronic signs near stores will warn customers about becoming victims of theft as they navigate the mass of humanity looking for bargains.

The deployments are part of a new strategy by the LAPD to deal with the retail roller derby that comes after Thanksgiving. In addition to stationing officers around shopping centers, the LAPD has been visiting stores across the city this week, talking to managers about the psychology of the frantic shopper.

Officials said the push was prompted by a series of incidents at Black Friday sales, notably one last year at a Porter Ranch Wal-Mart in which two dozen people were injured when a woman unleashed pepper spray during a frantic battle for some discounted video games.

Documents and testimony obtained by NaturalNews allege the following: The Rawesome Foods armed “raw milk raids” and prosecution of James Stewart and Sharon Palmer were carried out in part by law-breaking private citizens pretending to be lawful government authorities. Those individuals — who have been operating under false labels such as “district attorney” or “LAPD officer” — may conceivably be liable for millions of dollars in civil and criminal damages for their actions which technically may be described as:

• The armed robbery of Rawesome Foods, including theft of cash
• Willful destruction of private property
• Criminal kidnapping of James Stewart
• Violation of the civil rights of James Stewart
… and other crimes to be described later.

This all stems from the fact that in California, all state “officials” must have sworn and signed oaths of office on file in order to qualify as duly empowered state officials. This is written right into the California Constitution, Article 20, Sec. 3, which states: (http://www.leginfo.ca.gov/.const/.article_20)

– AND NOW … LAPD: ‘If You Notice A HEAVY MILITARY Presence Around Downtown Los Angeles This Week, Don’t Be Alarmed — It’s Only A Drill’

Former New York City police commissioner and LAPD chief William Bratton joins Cenk to talk about his new book, “Collaborate or Perish!” Despite recent criticism of the NYPD for unauthorized coordination with the CIA, Bratton says that communication can be an important strategy.

“In dealing with information intelligence as it relates to terrorism, the CIA has a lot of information that is appropriate for use by American police forces,” Bratton says. At the LAPD, “We had interactions with the CIA in the sense of meeting from them from time to time, certainly, just in order to make them aware of our capabilities and our needs. There is nothing that precludes that.”