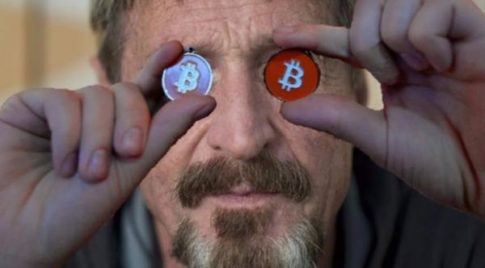 Today, he upped that bet… significantly!

– John McAfee’s New Company is Making a Killing in Bitcoins, But No One Gives a Damn

– John McAfee: ‘I Can Guarantee You, It Was Not the Russians’:

In case some of you were duped into believing this was evidence that proved Russia hacked the US elections, John McAfee would like to remind you that you’re probably a high tier retard and would believe virtually anything your government told you.

Crazy, but brilliant, John said “if it looks like the Russians did it, then I can guarantee you it was not the Russians.”

Read moreJohn McAfee: ‘I Can Guarantee You, It Was Not the Russians’

– McAfee: I Will Decrypt Information on the San Bernardino Phone For Free:

(TRUTHINMEDIA) Using an obscure law, written in 1789 — the All Writs Act — the US government has ordered Apple to place a back door into its iOS software so the FBI can decrypt information on an iPhone used by one of the San Bernardino shooters.

It has finally come to this. After years of arguments by virtually every industry specialist that back doors will be a bigger boon to hackers and to our nation’s enemies than publishing our nuclear codes and giving the keys to all of our military weapons to the Russians and the Chinese, our government has chosen, once again, not to listen to the minds that have created the glue that holds this world together.

Read moreJohn McAfee: I Will Decrypt Information on the San Bernardino Phone For Free

Real interview (after the introduction and the video clip) starts at 5:10 into the video:

Jeff interviews international man of intrigue and freedom fighter John McAfee, topics include: massive corruption in central america, McAfee on the run, Belize a dictatorship, a wild ride, you are responsible for your own security, selective privacy, obtrusive and sneaky applications present real dangers, you cant rely on the government, NSA far from the only spy, homeland insecurity, the madness of the ‘war on terror’, yoga and meditation, on being alone…

Read moreAnarchast – Jeff Berwick Intervievs John McAfee: Everyone Is Spying On You! (Video)

“Security is an illusion… We don’t get out of life alive — none of us, so there can be no absolute security. That’s the certainty.”

Andrew Demeter is a young American political activist, amateur filmmaker, entrepreneur, journalist, and author. His documentary ‘We The People, Genetically-Modified?’ won first prize in C-SPAN’s 2014 StudentCam competition. To collect the award, he visited the United States Capitol in Washington D.C. where he met and questioned former Speaker of the House Nancy Pelosi, on matters concerning the National Security Agency’s metadata collection. He recorded the short confrontation with his mobile phone, and the video subsequently went viral online. American radio host and documentary filmmaker Alex Jones has glorified Demeter as “a successful, young journalist…just by asking real questions!”.

On a less than joyous day such as this, we all need a little cheering up. So here is John McAfee. Why? Just watch it. 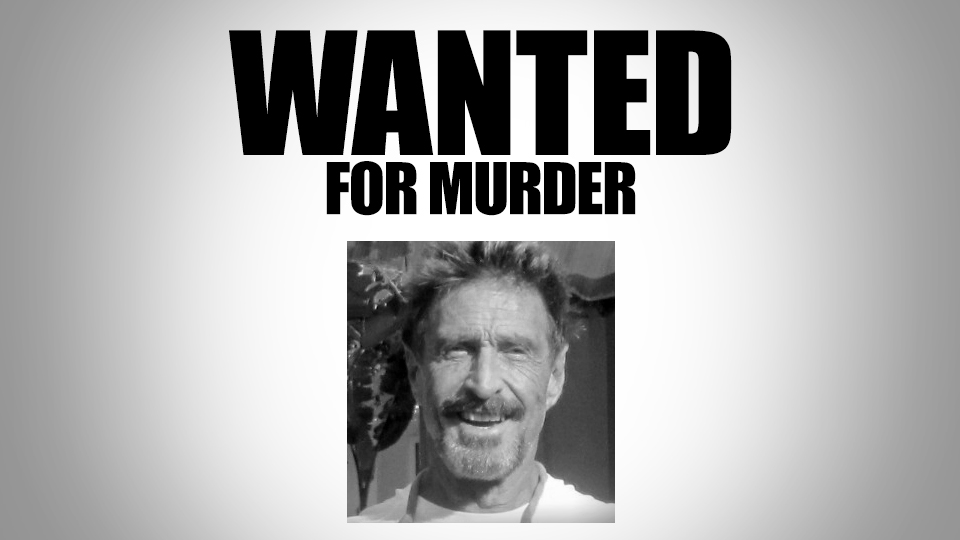 Antivirus pioneer John McAfee is on the run from murder charges, Belize police say. According to Marco Vidal, head of the national police force’s Gang Suppression Unit, McAfee is a prime suspect in the murder of American expatriate Gregory Faull, who was gunned down Saturday night at his home in San Pedro Town on the island of Ambergris Caye.Details remain sketchy so far, but residents say that Faull was a well-liked builder who hailed originally from California Florida. The two men had been at odds for some time. Last Wednesday, Faull filed a formal complaint against McAfee with the mayor’s office, asserting that McAfee had fired off guns and exhibited “roguish behavior.” Their final disagreement apparently involved dogs.