While the plight of precious metal mining in the 3rd largest gold producer in the world has been well-documented here, as on ongoing strike in various South African mines has crippled precious metal supply, so far the mining shut down had not spread outside the continent of Africa (excluding the occasional Bolivian and Venezuelan mine nationalization). Today, however, even more mining capacity was taken offline, as India’s Goa, the country’s second largest iron ore producer, announced it was temporarily ceasing all mining activity “after an expert panel formed by the central government found “serious illegalities and irregularities” in mining operations.” While no gold production has been impacted yet, this move, which likely has political overtones, will likely shift to other extractors soon, as more production capacity is taken offline, for either labor or kickback reasons. And as reported previously, demand by the now largest importer of gold in the world China, refuses to decline with supply, which has clear implications for the equilibrium price. It remains to be seen if Goa going dark will push iron-ore prices higher. It is quite likely that the collapse in Chinese iron-ore demand offline is far greater than anything Goa will remove from the market and as such will hardly push iron prices higher.

Goa has not banned movement of iron ore already produced and stored at ports or in transit, the statement said. The state will form a verification and clearance committee to scrutinize operations before giving approval to resume mining, R K Verma, principal secretary at mines and geology, said in a statement. 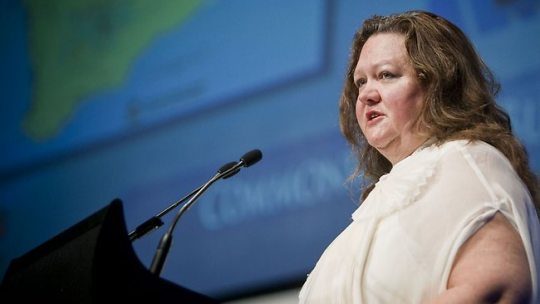 If you’re jealous of those with more money, don’t just sit there and complain. Do something to make more money yourself — spend less time drinking, or smoking and socializing and more time working.

Today she claimed that Australians should be willing to work for less than $2 a day:

Australian mining magnate Gina Rinehart has criticised her country’s economic performance and said Africans willing to work for $2 a day should be an inspiration.

The richest woman in the world is making an increasing number of public appearances, and speaking of increasingly controversial topics.

Read moreGina Rinehart (‘The Richest Woman In The World’) Is A BUBBLE, … Calls For For Australians To Take A Pay Cut, ‘Because African Workers Are Willing To Earn Just $2 A Day’

– The Circular Logic And Prayer Tactics Of Draghi Queens, Sinomaniacs, And Other Orwellians (ZeroHedge Aug 25, 2012):

We have desperately tried to explain the sheer idiocy of the circular argument of the Fed ‘attemping’ to stimulate fiscal policy by enacting an overly permissive monetary policy, having failed miserably time after time. Perhaps the ‘simplistic’ argumentation of Diapason’s Sean Corrigan will succeed where we have failed (although we are not holding our breath).

“Companies in the steel sector should be prepared for a long-term depression,” Zhang Changfu, secretary-general of the CISA, told media earlier.

Strange then, that the offificial data for July suggest that Chinese steel outout hit a new, all-time high of 61.7M tonnes during the month, the YoY increase making up no less than 99% of the entire global increment over the year. Why on earth would this be?

Probably no other commodity is tied to global growth, especially EM and China growth, than the key steel-making ingredient – Iron Ore. The iron ore price continues to plunge and it would appear that very few are focused on it. Critically, this is the one commodity that is not a futures contract, cannot be manipulated by trading desks or by levered hedge funds. Despite all the euphoria about risk assets and commodities – and the central bank front-running – Iron Ore prices continue to sink lower and lower… 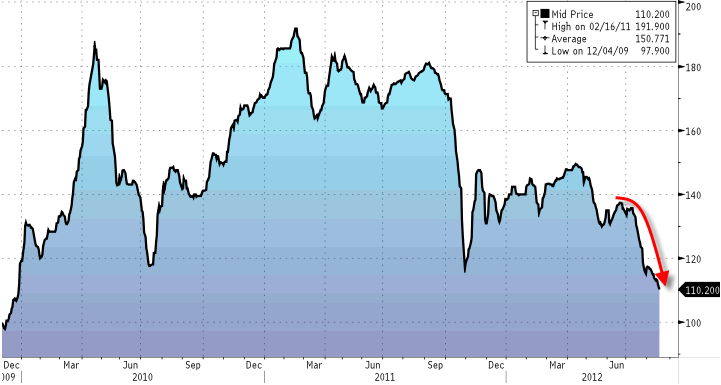