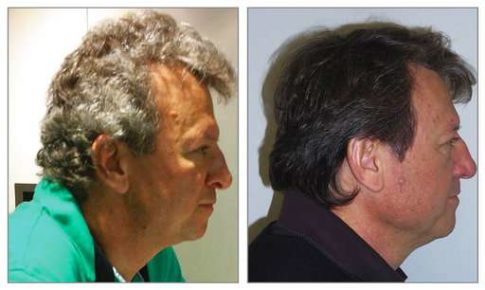 This undated combination of photos provided by the Journal of the American Medical Association in July 2017 shows a cancer patient with gray hair that unexpectedly turned dark while taking new immunotherapy drugs. Fourteen such cases were among 52 lung cancer patients being followed to see whether they developed bad side effects from the drugs – Keytruda, Opdivo and Tecentriq. (JAMA via AP)

Chemotherapy is notorious for making hair fall out, but the 14 patients involved were all being treated with new immunotherapy drugs that work differently and have different side effects. A Spanish study suggests that may include restoring hair pigment, at least in patients with lung cancer.

With the first patient, “we thought it could be an isolated case,” said Dr. Noelia Rivera, a dermatologist at Autonomous University of Barcelona.

A young father who was told he had only two months to live has had his brain tumours disappear after receiving groundbreaking drug treatment.

Sydney man Leigh Miller, 29, was diagnosed with advanced melanoma last year that spread to his liver, lung, blood and brain.