Americans have been losing the protection of law for years. In the 21st century the loss of legal protections accelerated with the Bush administration’s “war on terror,” which continues under the Obama administration and is essentially a war on the Constitution and U.S. civil liberties.

The Bush regime was determined to vitiate habeas corpus in order to hold people indefinitely without bringing charges. The regime had acquired hundreds of prisoners by paying a bounty for “terrorists.” Afghan warlords and thugs responded to the financial incentive by grabbing unprotected people and selling them to the Americans.

The Bush regime needed to hold the prisoners without charges because it had no evidence against the people and did not want to admit that the U.S. government had stupidly paid warlords and thugs to kidnap innocent people. In addition, the Bush regime needed “terrorists” prisoners in order to prove that there was a terrorist threat.

As there was no evidence against the “detainees” (most have been released without charges after years of detention and abuse), the U.S. government needed a way around U.S. and international laws against torture in order that the government could produce evidence via self-incrimination. The Bush regime found inhumane and totalitarian-minded lawyers and put them to work at the U.S. Department of Justice (sic) to invent arguments that the Bush regime did not need to obey the law.

The Bush regime created a new classification for its detainees that it used to justify denying legal protection and due process to the detainees. As the detainees were not U.S. citizens and were demonized by the regime as “the 760 most dangerous men on earth,” there was little public outcry over the regime’s unconstitutional and inhumane actions.

As our Founding Fathers and a long list of scholars warned, once civil liberties are breached, they are breached for all. Soon U.S. citizens were being held indefinitely in violation of their habeas corpus rights. Dr. Aafia Siddiqui an American citizen of Pakistani origin might have been the first.

Read morePaul Craig Roberts: It Is Now Official: The U.S. Is A Police State

Sounds like a nice official, international SS death squad to me.

– US Soldier: The Enemy Is At Home 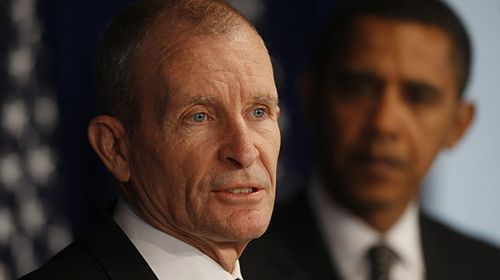 In a striking admission from the Obama Administration’s top intelligence officer, Director of National Intelligence Dennis Blair announced Wednesday that the United States may target its own citizens abroad for death if it believes they are associated with terrorist groups.

“We take direct action against terrorists in the intelligence community,” Director of National Intelligence Dennis Blair told the House Intelligence Committee. He said US counter-terrorism officials may try to kill American citizens embroiled in extremist groups overseas with “specific permission” from higher up.

If “we think that direct action will involve killing an American, we get specific permission to do that,” Blair said in response to questions from the panel’s top Republican, Representative Pete Hoekstra.

Blair’s comments came after The Washington Post reported that US President Barack Obama had embraced predecessor George W. Bush’s policy of authorizing the killing of US citizens involved in terrorist activities overseas.

If a United States citizen was determined to have joined a foreign terrorist group, that person could be legally murdered under orders given by President George W. Bush after the 9/11 attacks.

“After the Sept. 11, 2001, attacks, Bush gave the CIA, and later the military, authority to kill U.S. citizens abroad if strong evidence existed that an American was involved in organizing or carrying out terrorist actions against the United States or U.S. interests, military and intelligence officials said,” the Post reported. “The evidence has to meet a certain, defined threshold. The person, for instance, has to pose ‘a continuing and imminent threat to U.S. persons and interests,’ said one former intelligence official.

“The Obama administration has adopted the same stance. If a U.S. citizen joins al-Qaeda, ‘it doesn’t really change anything from the standpoint of whether we can target them,’ said a senior administration official. ‘They are then part of the enemy.'”