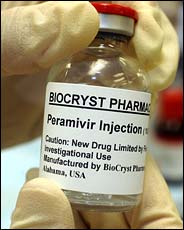 The U.S. Food and Drug Administration is allowing the use of an experimental antiviral drug to treat severe cases of H1N1 or swine flu.

The drug, Peramivir, is currently being developed by BioCryst Pharmaceuticals Inc. and is undergoing testing required for regular FDA approval.

The FDA issued a so-called emergency use authorization late Friday that allows doctors to use Peramivir, which is delivered intravenously, in certain hospitalized adult and pediatric patients with confirmed or suspected H1N1 influenza.

A handful of doctors have already treated patients with severe cases of H1N1 using Peramivir obtained through the agency’s expanded access rules that allow individual patients to obtain experimental drugs if certain conditions are met. The emergency-use authorization allows use of the drug without prior FDA approval.

The FDA said there’s only limited clinical data about whether Peramivir is safe and effective, but “based upon the totality of scientific evidence available, it is reasonable to believe that peramivir IV may be effective in certain patients.”