Just days after the US launched a campaign that implicitly aides the current regime headed by the supposedly outgoing PM, al-Maliki, it appears that latest US intervention has already led to “unexpected” consequences, this time with the prime minister appearing to have just staged a coup overthrowing Iraq’s president President Fouad Massoum moments ago.

Reuters reports that the prime minister “indicated that he will not drop his bid for a third term and accused the president of violating the constitution in a tough televised speech likely to deepen political tensions as a Sunni insurgency rages. Maliki, seen as an authoritarian and sectarian leader, has defied calls by Sunnis, Kurds, some fellow Shi’ites and regional power broker Iran to step aside for a less polarising figure who can unite Iraqis against Islamic State militants. 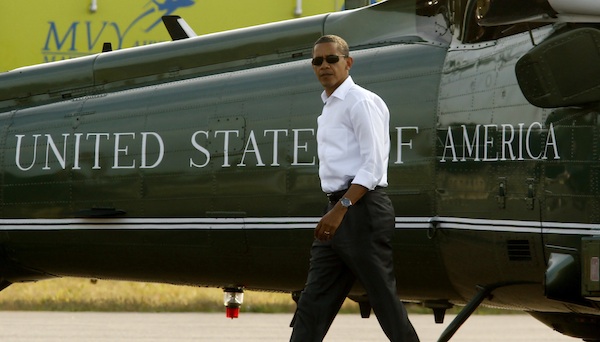 – The Secret Memo That Explains Why Obama Can Kill Americans (The Atlantic, Oct. 3, 2011):

Outside the U.S. government, President Obama’s order to kill American citizen Anwar al-Awlaki without due process has proved controversial, with experts in law and war reaching different conclusions. Inside the Obama Administration, however, disagreement was apparently absent, or so say anonymous sources quoted by the Washington Post. “The Justice Department wrote a secret memorandum authorizing the lethal targeting of Anwar al-Aulaqi, the American-born radical cleric who was killed by a U.S. drone strike Friday, according to administration officials,” the newspaper reported. “The document was produced following a review of the legal issues raised by striking a U.S. citizen and involved senior lawyers from across the administration. There was no dissent about the legality of killing Aulaqi, the officials said.”

Isn’t that interesting? Months ago, the Obama Administration revealed that it would target al-Awlaki. It even managed to wriggle out of a lawsuit filed by his father to prevent the assassination. But the actual legal reasoning the Department of Justice used to authorize the strike? It’s secret. Classified. Information that the public isn’t permitted to read, mull over, or challenge.

Why? What justification can there be for President Obama and his lawyers to keep secret what they’re asserting is a matter of sound law? This isn’t a military secret. It isn’t an instance of protecting CIA field assets, or shielding a domestic vulnerability to terrorism from public view. This is an analysis of the power that the Constitution and Congress’ post September 11 authorization of military force gives the executive branch. This is a president exploiting official secrecy so that he can claim legal justification for his actions without having to expose his specific reasoning to scrutiny. As the Post put it, “The administration officials refused to disclose the exact legal analysis used to authorize targeting Aulaqi, or how they considered any Fifth Amendment right to due process.”

Obama hasn’t just set a new precedent about killing Americans without due process. He has done so in a way that deliberately shields from public view the precise nature of the important precedent he has set. It’s time for the president who promised to create “a White House that’s more transparent and accountable than anything we’ve seen before” to release the DOJ memo. As David Shipler writes, “The legal questions are far from clearcut, and the country needs to have this difficult discussion.” And then there’s the fact that “a good many Obama supporters thought that secret legal opinions by the Justice Department — rationalizing torture and domestic military arrests, for example — had gone out the door along with the Bush administration,” he adds. “But now comes a momentous change in policy with serious implications for the Constitution’s restraint on executive power, and Obama refuses to allow his lawyers’ arguments to be laid out on the table for the American public to examine.” What doesn’t he want to get out?