A Swedish police officer recently offered up a little more truth than people are used to when he posted an epic rant on Facebook about immigrant crimes plaguing his police department and his country.  In the beginning of the post, the police officer said that he was “so fucking tired” and warned that “what I will write here below, is not politically correct.”  With that warning, below is brief taste of what followed courtesy of RT:

“Countries representing all the crimes this week: Iraq, Iraq, Turkey, Syria, Afghanistan, Somalia, Somalia, Syria again, Somalia, unknown, unknown country, Sweden. Half of the suspects, we can’t be sure because they don’t have any valid papers. Which in itself usually means that they’re lying about their nationality and identity.”

The Facebook post was published by Peter Springare, a senior investigator at the serious crimes division at the Örebro Police Department with 47 years under his belt.  Springare noted that what he had to say could harm an officer’s position and/or pay grade which is why most officers never speak out.

And here is a loose translation of the full post from Facebook that has been shared over 17,000 times in a matter of days: 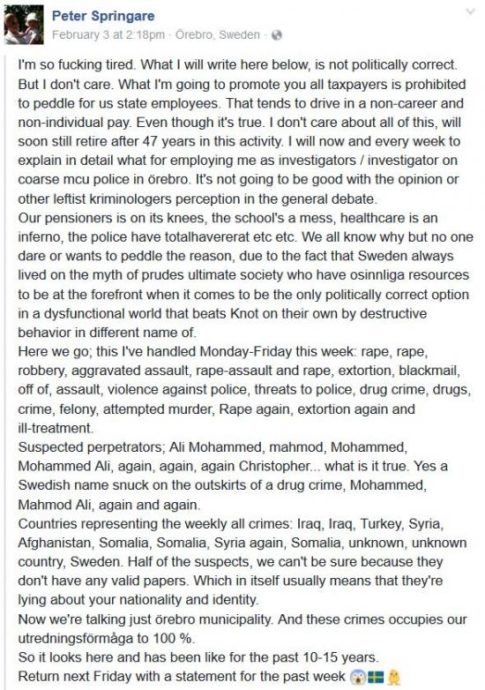 Not surprisingly, Springare’s rants ignited an immediate national firestorm with supporters applauding his courage for speaking up while others blasted his rant as racist and xenophobic.

People supporting Springare’s rant started a group on Facebook that quickly amassed over 75,000 members including several of his fellow police officers.  Meanwhile, according to news website Nyheter Idag, the police station where Springare works received at least 60 bouquets of flowers addressed to him on Monday – a “bloombomb” from admirers. 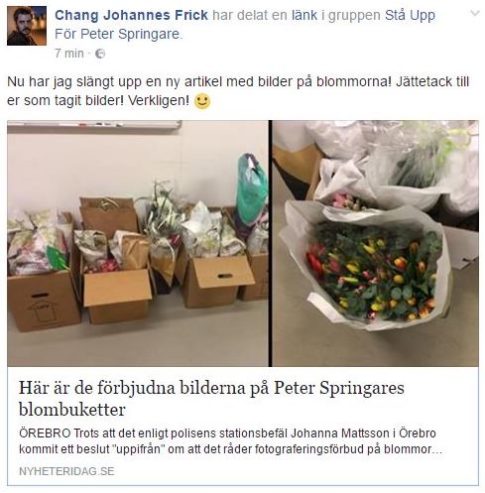 Of course, not everyone was thrilled with Springare’s post, with at least one person referring him to the special prosecutors’ office for an official investigation into whether he violated police regulations.

Others were not happy with the investigator’s remark, calling him right-wing or even racist. The post was referred to the special prosecutors’ office, which handles crimes involving law enforcement, to see whether it violated police regulations, according to Swedish media.

National Police Commissioner Dan Eliasson said that it was important to distinguish what an officer does in the line of duty and outside of it.

“When he acts in his professional capacity, he should be extremely careful with issues of ethnicity. If he wants to talk about the problems of crime among immigrants in his spare time, he has freedom of expression like any other,” he told P4 Extra radio, adding that he knows Springare as a “very good person.”

In a second post, Springare denied accusations of right-wing sympathies.

“If you can’t discuss the problem of crime among immigrants without somebody attributing it to racist propaganda, we are in deep trouble,” he said. “The problem is that nobody wants to talk about this.”

Turns out the U.S. isn’t the only place where providing actual facts/statistics about crime can result in a person being labelled a racist.