Well, here is another graph to look at and some more related info.

So much for “unprecedented global warming”.

– Anyone who says we’re enduring “unprecedented global warming” is lying or woefully misinformed:

Look at this chart. The blue line shows temperatures for the past 600 million years. 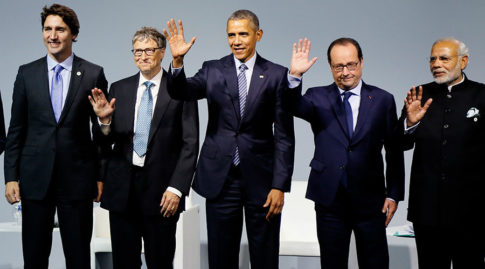 A recently-retired top scientist from the America’s National Oceanic and Atmospheric Administration (NOAA) has accused his superiors of fudging data to hide a slowdown in the rise of global temperatures ahead of the UN Climate Change Conference in 2015.

John Bates told the Sunday Mail that Thomas Karl, the head of the climate change department at the government agency, authored a paper based on false data, “rushed” it into publication, and then saw his work used to make international commitments to fight global warming worth hundreds of billions of dollars.

After rising by 0.113C per decade between 1950 and 1999, temperatures appeared to have stabilized between 2000 and 2014, despite rising levels of CO2 emissions, which climate change scientists said were responsible for the earlier warming.

The “pause,” unveiled in a 2012 UN report, shook up the entire scientific community, and cast doubt upon hundreds of models confidently predicting a trend of accelerating warming. 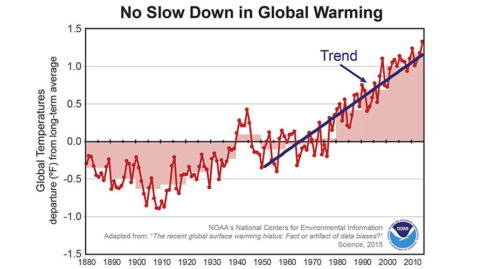 But then, Karl’s “pausebuster”paper emerged, just month before Barack Obama, Angela Merkel and scores of other world leaders congregated in Paris, showing that global warming was not slowing down, but actually accelerating to 0.116C per decade.

Bates said that in the months preceding the publication, Karl was “insisting on decisions and scientific choices that maximized warming and minimized documentation… in an effort to discredit the notion of a global warming pause, rushed so that he could time publication to influence national and international deliberations on climate policy.”

The scientist claims that the land reading cited in the study were calculated using two combined historical records, with the help of an unfinished and buggy piece of software, whose findings cannot be independently verified, and have still not been confirmed by the authors. For the sea temperature records, Karl decided to use temperatures collected by ships.

“They had good data from buoys. And they threw it out and ‘corrected’ it by using the bad data from ships. You never change good data to agree with bad, but that’s what they did – so as to make it look as if the sea was warmer,” said the scientist.

Bates, who had devised the internal data evaluation protocol at NOAA, claimed that he gave his colleagues a “hard time” about their conclusions, and “they never really justified what they were doing.” He insists that the paper never passed the agency’s own evaluation criteria.

The paper was immediately questioned by notable climate sceptics, and Republican House Science Committee Chairman Lamar Smith, operating from data obtained from a then-unknown “whistleblowers” subpoenaed NOAA, unsuccessfully demanding that the agency reveal its internal communication pertaining to the paper.

Despite the fierce controversy around the paper, its contents were widely disseminated by the media. It was also prominently referenced during the Paris conference in November and December 2015, at the conclusion of which world leaders promised to transfer $100 billion per year from wealthier countries to poorer ones to fight climate change, and vowed to ensure that temperatures do not rise by more than 2C.

Bates, who has served as a member of the board of directors of the American Geophysical Union (AGU) and was awarded the US Department of Commerce Gold Medal in 2014 for his work in collecting and archiving climate data, says he was driven by public alarm that President Donald Trump, a noted climate change sceptic, would order the defunding of key agencies, and the deletion of temperature records.

“How ironic it is that there is now this idea that Trump is going to trash climate data, when key decisions were earlier taken by someone whose responsibility it was to maintain its integrity – and failed,” Bates said.

Bates, who retired from NOAA last year, said his words could spark reform at an agency that had employed him for three decades.

“I’m hoping that this will be a wake-up call to the climate science community… I want to address the systemic problems. I don’t care whether modifications to the datasets make temperatures go up or down. But I want the observations to speak for themselves, and for that, there needs to be a new emphasis that ethical standards must be maintained.”

Reaction to the revelations has predictably split along previousallegiances.

Karl, who also left his post last year, denied he was preparing the paper specifically for the conference, and said he did not properly archive and reveal the data, as it is a “process that takes a long time.”

The Grantham Research Institute on Climate Change and the Environment at the London School of Economics said that one of the graphs used in the article was deceptive, and that the article as a whole was “fake news to mislead the public and policymakers about the scientific evidence for climate change.”

Michael E. Mann, the Penn State scientist responsible for the since discredited hockey-stick temperature graph, called the article the “latest denialist smear against #NOAA scientists” in a tweet.

But Lamar Smith thanked Bates “for courageously stepping forward to tell the truth about NOAA’s senior officials playing fast and loose with the data in order to meet a politically predetermined conclusion.”

NOAA, AGU, and Science, the journal that published the 2015 paper, have all released statements, saying that they are aware of the revelations, without committing to a judgement on their substance.

“Now the Big Freeze will all be our fault, and you can bet the Rothschilds will push for a new tax on icicles for us to pay to keep them comfortable while we freeze.”