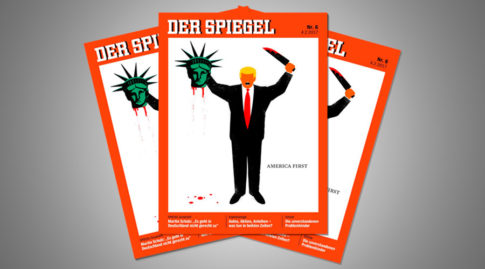 The latest cover of one of Europe’s largest weekly magazines, Der Spiegel, has been widely discussed on social media, as the publication decided to feature America’s new leader in a provocative pose.

On the cover, the quite recognizable figure of Donald Trump is seen holding a bleeding head of the Statue of Liberty in one hand and a bloodstained knife in the other. Der Spiegel’s online version even offers an animated version, with the blood dripping from Lady Liberty’s severed head.

The cover is an apparent reference to Trump’s recent executive order that introduced a temporary travel ban on nationals from certain Arab countries. Dubbed the “Muslim ban,” the order has spurred a wave of protests and lawsuits.

I get it! Der Spiegel is saying that Trump is a Muslim! Allahu Akbar! pic.twitter.com/a1O7XZukca

German Chancellor Angela Merkel has reportedly criticized Trump’s decision, saying his ban could not be justified with anti-terrorist efforts. The measure “does not justify putting people of a specific background or faith under general suspicion,” Merkel’s spokesman has said.

While some called Der Spiegel’s cover “stunning,” others considered it “disrespectful.”

German newspaper cover… stupids Der Spiegel … If you don’t like #trump…it’s your opinion but, respect #usa#respectpic.twitter.com/2ZUv2R99j6

Some users criticized both Trump and “propaganda organ” Der Spiegel, while others mocked the magazine by offering their own improved versions of the cover.

It’s not the first time the German magazine is inspired by the now US leader, dedicating controversial covers to Trump.

When Der Spiegel did this splash, it wasn’t a criticism… it was a prediction #Trumppic.twitter.com/IJcq18Tmlh

Well, at least we’re going to get a nice coffee table book of Donald Trump Spiegel covers from one of the post-apocalyptic printing presses. pic.twitter.com/rYVut44RJ3