Update: Moments ago, the White House issued a statement saying the DOJ would, as expected, challenge the federal court’s ruling that halted travel ban “at the earliest possible time” and will file an emergency stay of Robart’s “outrageous order.” 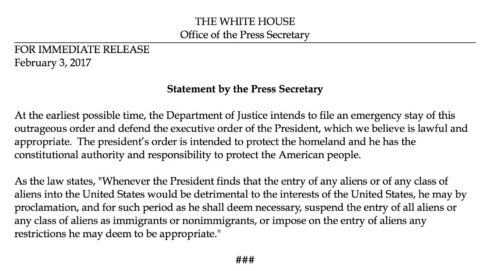 Following a brief moment of ‘success’ for the Trump administration as a Boston judge ruled Trump’s immigration policy was not a Muslim ban, a Bush-appointed federal judge in Seattle, who said the states of Washington and Minnesota can sue claiming their residents were harmed by the ban, granted a nationwide temporary restraining order blocking Trump’s immigration ban.

District Judge James Robart ruled the executive order would be stopped nationwide effective immediately: his ruling was the most comprehensive legal rebuke of Trump’s Jan. 27 executive order prohibiting immigrants from Iran, Iraq, Syria and four other nations from entering the U.S. for 90 days. Judges in Brooklyn, New York, Los Angeles and Alexandria, Virginia, had previouslyissued orders that are less sweeping.

Washington Attorney General Bob Ferguson was delighted with the decision: “The Constitution prevailed today,” Ferguson said in a statement after the ruling.

“It is not the loudest voice that prevails on the Constitution,” Ferguson continued speaking outside the courthouse. “We are a nation of laws, not even the president can violate the Constitution. It’s our president’s duty to honor this ruling and I’ll make sure he does,” Ferguson added hopefully.

Good luck with that.

In his ruling, Robart said that “the state has met its burden in demonstrating immediate and irreparable injury” while Fergsuon added that “Judge Robart’s decision, effective immediately, effective now, puts a halt to President Trump’s unconstitutional and unlawful executive order. It puts a stop to it immediately, nationwide.” The court order, effective immediately, will remain in place until the judge considers a motion – probably within a month – to permanently invalidate the president’s order, Ferguson said.

Ferguson, a Democrat, filed the lawsuit three days after Trump signed the executive order. The suit argued that the travel ban targets Muslims and violates constitutional rights of immigrants and their families.

In his request for the order, according to Bloomberg, Ferguson had said the effects on the state included economic consequences for employers based there, including Microsoft Corp., Starbucks Corp. and Amazon.com Inc. Expedia Inc., based in Bellevue, Washington, had about 1,000 customers with flight reservations in or out of the U.S. from the seven countries, he said. Minnesota, like Washington, cited the effect of the ban on students at its colleges and universities, as well as health care centers including the Mayo Clinic. The state’s 5.4 million residents included 30,000 immigrants from the affected countries, it said in the lawsuit.

According to The Hill, in a phone interview with CNN Friday evening, Ferguson said he “expected win, lose or draw” that the case would move “fairly quickly through, up to the Ninth Circuit” Court of Appeals — “just because of the magnitude of the executive order.”

And hinting that the Supreme Court showdown we suggested previously now appears inevitable, Ferguson added that he is “prepared for this case to go all the way to the Supreme Court whichever way the Ninth Circuit Court of appeals goes,” he said, anticipating a challenge to Robart’s ruling. “It’s a case of that magnitude, it’s a case that frankly I think will ultimately end up before the U.S. Supreme Court, so that would not surprise me one way or the other.”

Ferguson’s ruling was on the basis that states had already suffered harm from the travel ban. He also said the lawsuit challenging the legality of the order has a good chance of succeeding. Lawyers for the government had argued the states lacked standing to sue, according to the Seattle Times, and that the order was within Trump’s executive powers.

That said, it is likely that like last Saturday’s Brooklyn decision, that this ruling oo is being blown out of proportion: to wit, a Department of Homeland Security official told NBC News that “the judge’s order will have no immediate practical effect” adding that “all previously issued visas from the seven affected countries were canceled by last week’s executive order” meaning all travelers would have to reapply.

Furthermore, the Trump administration could seek a stay of the Seattle judge’s order.

The decision came on a day that attorneys from four states were in courts challenging Trump’s executive order. Trump’s administration justified the action on national security grounds, but opponents labeled it an unconstitutional order targeting people based on religious beliefs – which the Boston judge has since ruled invalid.

At this rate, it now appears almost certain that the Trump executive order showdown will conclude in the Supreme Court… where the tie breaking Justice will be the just appointed by Trump, Neil Gorsuch. Which is why one can see why Trump may feel confident about the outcome of the case.