Update: It appears President Trump is pleased with the judge’s decision…

We must keep “evil” out of our country!

As we detailed earlier, in a blow to every mainstream media news outlet (and likely hurting a lot of feelings), President Donald Trump’s ban on immigrants from seven Muslim-majority countries will take effect in Boston on Sunday after a federal judge refused to extend a temporary ruling blocking its enforcement.

As Bloomberg reports, the decision by U.S. District Judge Nathaniel Gorton on Friday dealt a setback to rights advocates who argued that blocking people from seven nations in the Middle East was unconstitutional. Gorton was weighing whether to extend a seven-day order blocking parts of Trump’s Executive Order.

The case, filed by the American Civil Liberties Union on behalf of several affected immigrants, is one of several that followed Trump’s Jan 27 order, which roiled global travel by barring entry to the U.S. of citizens of Iran, Iraq, Libya, Somalia, Sudan, Syria and Yemen. Individuals, organizations, politicians and some states called it unconstitutional religious discrimination against Muslims.

“Where does it say Muslim countries?”

“If your honor’s question is, ‘Does the word ‘Muslim’ make a profound presence in this executive order?,’ my answer is that it doesn’t,… But the president described what he was going to do as a Muslim ban and then he proceeded to carry it out.”

“Am I to take the words of an executive at any point before or after election as a part of that executive order?”

Press responded that the list had come from a law passed in 2015 and amended early last year requiring that citizens of the seven countries apply for visas to enter the United States, “out of concern about the refugees that were coming, mainly from Syria at that time and terrorist events that were occurring in Europe.”

As we noted previously, only 12.5% of the world’s Muslims live in the seven countries on Trump’s immigration ban list… 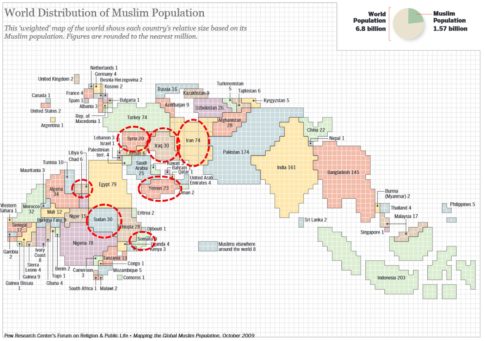 Which left the judge to decide (as the full docket explains here),

“The language in Section 5 of the EO is neutral with respect to religion,

“The provisions of Section 5, however, could be invoked to give preferred refugee status to a Muslim individual in a country that is predominately Christian. Nothing in Section 5 compels a finding that Christians are preferred to any other group.”

Gorton wrote there is a rational reason for the Trump administration’s policies. The federal Immigration and Naturalization Act gives the president broad power over immigration.

“The order provides a reasonably conceivable state of facts (which concerns national security and) that could provide a rational basis for the classification,” he wrote. “Accordingly, this Court declines to encroach upon the “delicate policy judgment” inherent in immigration decisions.”

For the forgoing reasons, the Court declines to impose any injunctive relief and will not renew the temporary restraining order that was entered on January 29, 2017 (Docket No. 6).