Yesterday, in The Threat Posed by Putin’s Cyber Warriors the FT was so worried about “disinformation” that it proposed restrictions on freedom of speech.

“The Russian state is far from alone in using hacking as a form of espionage. What distinguishes Moscow’s activity is the malicious way it appears to be using the information garnered and disseminating fake news to further pollute the political atmosphere. The timing of leaks during the US election looked calculated to weaken Hillary Clinton, the Democratic candidate,” claims the FT editorial view.

After railing against “fake news” the editorial view went on to propose restrictions on free speech.

“Berlin is considering imposing hefty fines on media outlets that spread false and malicious information. This may seem an undue restriction to freedom of speech but in the context of a propaganda war designed to undermine western democracy, it may be necessary to do more than enforce existing laws on libel and incitement.”

Actually it’s the subtitle I want you to consider. 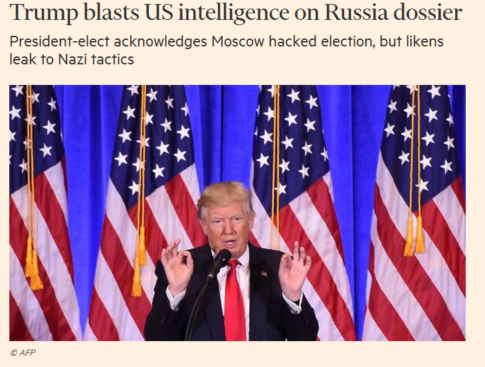 Trump did not admit Moscow hacked the “election”.

As far as hacking, I think it was Russia. But I think we also get hacked by other countries and other people. And I — I can say that you know when — when we lost 22 million names and everything else that was hacked recently, they didn’t make a big deal out of that. That was something that was extraordinary. That was probably China.

But remember this: We talk about the hacking and hacking’s bad and it shouldn’t be done. But look at the things that were hacked, look at what was learned from that hacking.

That Hillary Clinton got the questions to the debate and didn’t report it?

The Financial Times should know the difference, especially in this heated environment.

By the way, the DNC was “hacked” by anyone. Someone at the DNC exposed their password in a phishing expedition.

And now we have Democrat Senators all wanting an investigation into a proven bogus dossier given to the FBI by Senator McCain.

To top it off, the FT wants to restrict freedom of speech to prevent the spread of fake news.

Who is to be the judge of fake news?

If the FT editorial board has an ounce of sense, it will immediately take back its preposterous stance.