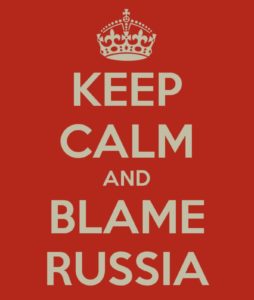 Welcome to “everyone I disagree with works for Putin,” the UK version.

UK Labour leader Jeremy Corbyn sits on the polar opposite of the political spectrum in most respects from U.S. President elect Donald Trump, yet they are both being accused of the same blasphemy — wanting peace with Russia. Here’s what I’m talking about, from The Independent:

In an interview with BBC Wales today, Mr Corbyn said it was “unfortunate that troops have gone up to the border on both sides”.

He added: “I don’t want to see any more troops deployed on the borders between Nato and Russia, I want to see a de-escalation, ultimately a de-militarisation and better relationships between both sides of it... there cannot be a return to a Cold War mentality.”

This is precisely the sort of sober commentary I’d want to hear from an elected leader at such an unnecessarily charged and dangerous moment, yet Mr. Corbyn was attacked for it in a manner quite familiar to us Americans…

The Conservative Armed Forces Minister Mike Penning has accused Jeremy Corbyn of “collaborating with Russia” in response to comments that British troops about to be deployed to Estonia were there to “escalate tensions” between Russia and NATO.

Mr Penning said the comments made on Wednesday by a spokesperson for Mr Corbyn showed that Labour “cannot be trusted with Britain’s national security”.

Mr Penning said: “Britain has Nato’s second biggest defence budget and plays a leading role in the alliance. It is unprecedented for a leader of the opposition to attack the defensive deployment of British troops in Nato territory.

“These comments suggest that the Labour leader would rather collaborate with Russian aggression than mutually support Britain’s Nato allies. As with Trident, everything Labour says and does shows that they cannot be trusted with Britain’s national security.”

The fact that Jeremy Corbyn is being attacked in exactly the same manner as Donald Trump tells us all we need to know. Namely, that if you disagree with the neocon/neoliberal establishment’s foreign policy, this makes you an agent of Vladimir Putin. Absurd and childish? Certainly, but that’s what they’re going with. Which is extremely important to recognize.

Those of us opposed to a continued insane push for more imperial overseas militarism must understand this isn’t a partisan issue. There is an entrenched establishment in power, and they laugh at Republican/Democrat or Conservative/Labour distinctions. These people are totally united in their thirst for confrontation with Russia.

Ok, fine, so what do we do about it? The reason I’m pointing all of this out is to stress the importance of unity. I see too much ego strutting and preening in the alternative media world today. Too many people who seem more focused on their own fame and status, and appear too preoccupied with picking stupid fights with others to see the bigger picture of what’s really at stake. The time for pettiness is over, the time for unity has arrived.

We need to isolate the big issues we all agree in order to successfully take on a well organized, bipartisan establishment. As I noted on Twitter the other day.

Politics today should be seen in the following way.
Imperial interests vs. the interests of the American people.
These do not overlap much.

Here’s how to win. Pick the issues 80% of us agree on vs. the neocon/neoliberal status quo. Ignore the rest until they are defeated.

Here are 2 examples of issues that unite us, rather than divide us.
Opposition to:
1) Revolving door cronyism/corruption.
2) Militarism.

If we are divided and conquered with petty fights by demanding conformity on all the issues we care about, we are doomed. I don’t want to convince you that I’m right about everything, I want to win. To win, we must unite.