The Syrian war is on the verge of the biggest shift in the balance of power since 2011, with the Assad regime – with support from Russian forces – having retaken Aleppo. And, as Russia’s UN envoy Vitaly Churkin notes, an arrangement has been reached for militants to leave the besieged areas of eastern Aleppo “within hours”, confirming earlier media reports that Assad is about to have full reign of the hotly contested city – a symbolic center of the anti-Assad insurgency.

As RT futher adds citing Churkin, “the military operation in Eastern Aleppo is now over, and the Syrian government has begun restoring control.”

“My latest information is that they indeed have an arrangement achieved on the ground that the fighters are going to leave the city,” Churkin said Tuesday ahead of the emergency UN Security Council meeting in New York. According to Churkin, the militants, who have been holed up in eastern Aleppo for years, are scheduled to leave the city “within hours.”

While this marks the biggest victory for Assad, and his Kremlin-based backers, it is also the biggest regional humiliation for the US ally-backed Syrian “rebels”, who have just lost their biggest resistance outpost.

The envoy added that the withdrawal of militant fighters will put the city under the control of the Syrian government and there will be no need for eastern Aleppo residents to leave their homes.

During his speech at the meeting, Churkin told the UNSC members that the “counterterrorist operation in Aleppo will conclude in the next few hours.” The fighters are currently leaving the city through corridors that they chose themselves, including ones leading to Syria’s Idlib province, Churkin stressed.

“The counter-terrorist operation in Aleppo will be completed within a few hours. All the militants along with their families and the wounded are now withdrawing through the agreed corridors in the directions they themselves have chosen, including in the direction of Idlib,” the Russian envoy said.

An official with one of the militant groups in Aleppo earlier told Reuters that an agreement had been reached with Russia on Tuesday, while another rebel representative reported, “There are signs of a breakthrough in the coming hours.” However, UN Secretary-General Ban Ki-moon has urged the Syrian government and its Russian and Iranian allies to “urgently allow the remaining civilians to escape” Aleppo and facilitate humanitarian aid access to the city.

“In recent days and hours, we appear to be witnessing nothing less than an all-out effort by the Syrian government and its allies to end the country’s internal conflict through a total, uncompromising military victory,” Ban told the UN Security Council.

Aleppo has been divided between the government forces and the militants since the start of the Syrian conflict in 2011. However, in recent weeks, the Syrian Army has made significant gains in eastern Aleppo and is close to liberating it from the militants.

So what happens next? Here is a  quick primer from Bloomberg on “life after Aleppo’s fall.”

Syrian President Bashar al-Assad, assisted by Russia and Iran, is on the verge of re-taking Aleppo in what would be the biggest victory for his troops against rebels in almost six years of civil war. Assad says he’ll turn his attention to the remaining rebel strongholds. His opponents vow to keep fighting in the absence of a political solution. There could be a surge in guerrilla conflict in areas reclaimed by Assad’s troops, while jihadists look to exploit any weaknesses. The world’s reaction to all this may depend on the emerging relationship between Russia and the incoming U.S. president, Donald Trump.

1. Is an end to fighting any closer?

Much of eastern Aleppo, a symbolic center for the anti-Assad insurgency, is in ruins, leveled by Syrian and Russian bombing that led European and U.S. officials to speak of possible war crimes. But the opposition isn’t ready to give up. “Aleppo is an important place for the revolution, but it’s not the last,” George Sabra, chief negotiator for rebel forces, told the BBC in November. Assad agrees. “Aleppo will be a gain, but to be realistic, it doesn’t mean the end of the war,” he said in an interview with pro-government al-Watan newspaper published on Dec. 8. 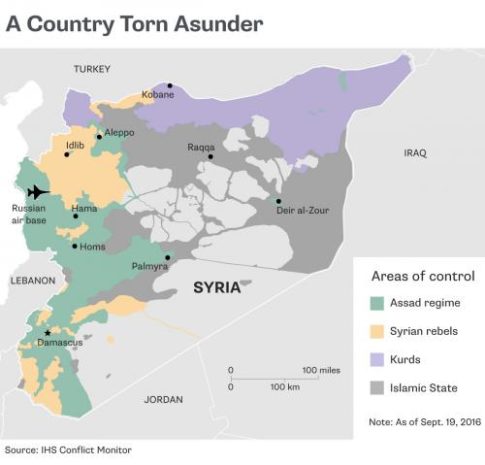 2. Where will Assad focus next?

Assad said in October Aleppo would serve as “the springboard” for other offensives, singling out Idlib. His regime lost almost all of this region — about 60 kilometers (35 miles) southwest of Aleppo near the Syrian-Turkish border — in mid-2015. Idlib borders Latakia, the heartland of the Assad regime, and is close to the Damascus-Aleppo highway.

Taking Aleppo, whose eastern neighborhoods had been held by rebels since 2012, will give Assad control over Syria’s biggest cities, representing more than 40 percent of the country’s territory and about 60 percent of its people. But Syria has distinct areas outside Assad’s base in the west, including Kurdish-held enclaves in the north, Islamic State controlling much of the east, and other groups left with shrinking pockets of influence.

4. How will the nature of the conflict change?

Some 150,000 rebels, including jihadists, are fighting Assad, and they’ll be assuming a more prominent role, according to Charlies Lister, a senior scholar at the Middle East Institute in Washington. “The biggest losers from Aleppo’s collapse are Syria’s moderate opposition groups, which had remained the city’s primary actors ever since conflict first erupted there in early 2012,” he wrote. In northern Syria, the mainstream opposition looks set to “transform itself into a guerrilla-style insurgency in 2017,” he added.

5. What does all this mean for Assad?

He’ll have a hard time keeping local and foreign militias in check and administering cities he controls. That’s been the case in Homs and most recently the historic city of Palmyra, where Islamic State took advantage of the focus on Aleppo to attack a city it had held until March. “Aleppo will be even more difficult to police and stabilize,” said Raphael Lefevre, author of “Ashes of Hama: the Muslim Brotherhood in Syria.” Insecurity has persisted in areas liberated from rebel control, he said, with civilians threatened by outbreaks of criminality and revenge attacks.

6. Will other nations intervene?

The big unknown hanging over the future of the conflict is the shifting agendas of global and regional powers. Will Russia and Iran stand by Assad if he continues to insist on reconquering the entire country? With their support, Assad is in a better shape than he was before Russia’s intervention more than a year ago. What will Turkey do? Its forces in neighboring Syria are combating both Islamic State and Kurdish fighters linked to the PKK, a group that has been considered Turkey’s main terrorist threat since the 1980s.

The U.S. president-elect has said he’s open to a more cooperative relationship with Russian leader Vladimir Putin and has vowed to concentrate on defeating Islamic State rather than helping rebels defeat Assad. That could give Russia a freer hand to press for a military victory in Syria that boosts its status as a great power in the Middle East.