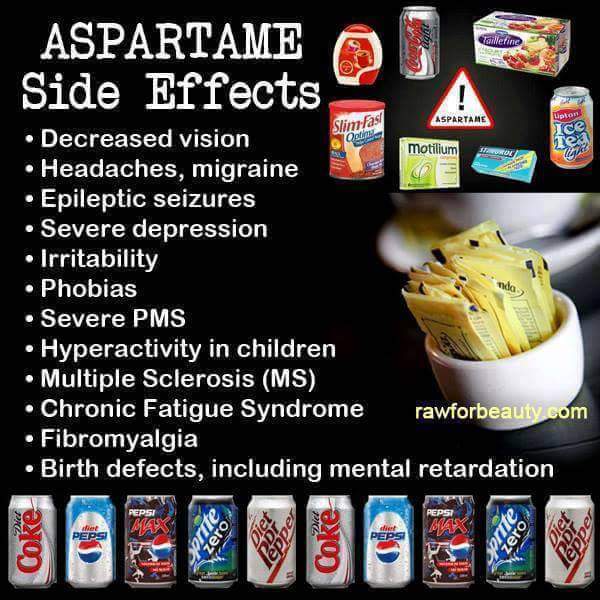 – This Is How Aspartame Causes Obesity:

The allure of artificial sweeteners — zero calories and a sweet taste — is a strong one, such that up to 180 million Americans use them routinely.1

There have been concerns from the beginning, however, that consuming synthetic compounds with hyper-sweetness (200 times that of sugar in the case of aspartame) has some serious drawbacks.

One of the most appalling, especially to those consuming artificially sweetened sugar-free and diet products in the hopes of losing weight, is their propensity to fuel weight gain. Researchers wrote in the Yale Journal of Biology and Medicine:2

Although their reputation as a weight-loss aid has held strong since the beginning, it’s been known for years that they seem to have the opposite effect.

Myths, Misunderstandings and Outright lies about owning Gold. Are you at risk?

Recently, a team of Massachusetts General Hospital (MGH) investigators even revealed a potential reason why artificial sweeteners like aspartame prevent, rather than promote, weight loss.3

A study on mice revealed that animals fed aspartame-laced drinking water gained weight and developed symptoms of metabolic syndrome while mice not fed the artificial sweetener did not.

In a previous study, IAP was found to prevent the development of metabolic syndrome (and reduce symptoms in those with the condition) when fed to mice.4Study author Richard Hodin, MD, of the MGH Department of Surgery, said in a press release:5

“We found that aspartame blocks a gut enzyme called intestinal alkaline phosphatase (IAP) that we previously showed can prevent obesity, diabetes and metabolic syndrome; so we think that aspartame might not work because, even as it is substituting for sugar, it blocks the beneficial aspects of IAP.”

Mice in the study were fed either plain water or water infused with the equivalent amount of aspartame found in two to 3 1/2 cans of soda, along with a normal diet or a high-fat diet. Mice in the high-fat group that drank aspartame-infused water gained more weight than those eating the same diet without aspartame in their water.

Further, all the mice fed aspartame had higher blood sugar levels — an indicator of glucose intolerance — and higher levels of inflammatory protein TNF-alpha, which is suggestive of systemic inflammation. Given aspartame’s inhibition of IAP, the researchers suggested its use is counterproductive.

Artificial Sweeteners Linked to Weight Gain Since the 1980s

Artificial sweeteners are still viewed as a weight-loss aid in 2016 even though their hindrances to weight loss have been documented since at least the 1980s.

Such associations have only continued to grow over the passing decades. Artificially sweetened beverages, including diet soda, are among the key culprits, with intake associated with “striking” increases in waist circumference among older adults, according to one study.8

The study found drinking aspartame-sweetened diet soda daily increased the risk of type 2 diabetes by 67 percent (regardless of whether they gained weight or not) and the risk of metabolic syndrome 36 percent.

One way artificial sweeteners may increase your risk of weight gain, obesity and other related problems like type 2 diabetes is by inducing “metabolic derangements,” according to a report published in the journal Trends in Endocrinology and Metabolism:10

… [C]onsuming sweet-tasting but noncaloric or reduced-calorie food and beverages interferes with learned responses that normally contribute to glucose and energy homeostasis.

Because of this interference, frequent consumption of high-intensity sweeteners may have the counterintuitive effect of inducing metabolic derangements.”

Soda Industry Pledge to Cut Calories Off to Slow Start

The soda industry has pledged to cut the number of calories Americans consume via beverages by 20 percent over a decade, but they’re off to a slow start.11 In 2015, this caloric intake dropped by just 0.2 percent, according to a beverage industry report.

In addition to introducing smaller package sizes and reformulating products, a key strategy toward this goal is the promotion of artificially sweetened diet drinks, but the consumption of low- and no-calorie soda fell by nearly 6 percent last year.

Americans are growing increasingly wary of artificial sweeteners, and the soda industry is becoming increasingly desperate to hold on to its once-loyal customers. One of their ongoing strategies to appear like they care about your health is to promote their diet beverages as a healthy alternative.

In 2013, they rolled out an ad campaign encouraging people to unite in the fight against obesity, and then swiftly launched another campaign touting aspartame in its diet sodas.

According to the ad, aspartame is a “safe, high-quality alternative to sugar.” Clearly they’ve not reviewed the hundreds of studies on this artificial sweetenerdemonstrating its harmful effects or the risks of consuming diet sodas in general.

Research published in the Journal of the Academy of Nutrition and Dietetics also revealed that people who drink diet beverages may end up compensating for their “saved” calories by eating more foods high in sugar, sodium and unhealthy fats.12

Obese adults had the highest incremental daily calorie intake from unhealthy foods associated with diet beverages. Researcher Ruopeng An, a kinesiology and community health professor at the University of Illinois, noted:13

“It may be that people who consume diet beverages feel justified in eating more, so they reach for a muffin or a bag of chips … Or perhaps, in order to feel satisfied, they feel compelled to eat more of these high-calorie foods.”

For more on the detrimental effects of diet sodas, including in relation to aspartame and weight gain, check out our infographic below.

Beyond Weight Gain: Problems With Aspartame

When aspartame is in liquid form, it breaks down into methyl alcohol, or methanol, which is then converted into formaldehyde and represents the root of the problem with aspartame.

While industry funded studies, which are notoriously biased, attempt to support aspartame safety, 92 percent of independently funded studies found aspartame may cause adverse effects, including depression and headaches.14 A recent study also found the administration of aspartame to rats resulted in detectable methanol even after 24 hours, which might be responsible for inducing oxidative stress in the brain.15

There are a number of reasons to avoid artificial sweeteners (like their link to cancer), but one that may be most compelling for those of you trying to lose weight is the simple fact that they are likely to impede this process.

When a sweets craving strikes, resist the urge to reach for an artificially sweetened food or beverage and eat something naturally sour instead. Sour taste, such as that from fermented vegetables or water spruced up with lemon or lime juice, helps to reduce cravings for sweets.

If that doesn’t appeal to you, try a cup of organic black coffee, an opioid receptor that can bind to your opioid receptors, occupy them and essentially block your addiction to other opioid-releasing foods.16,17

I also recommend addressing your cravings on an emotional level. Turbo Tapping, which is a version of the Emotional Freedom Techniques (EFT), is specifically suited to help eliminate sweet cravings and it can be done virtually anywhere, anytime a craving strikes.