– Ron Paul Lashes Out At WaPo’s Witch Hunt: “Expect Such Attacks To Continue”:

WaPo publishes article that says @RonPaulInstitut (and others) are “sophisticated Russian propaganda” https://t.co/r8QPFEH92Xpic.twitter.com/E7wVbKY0vW 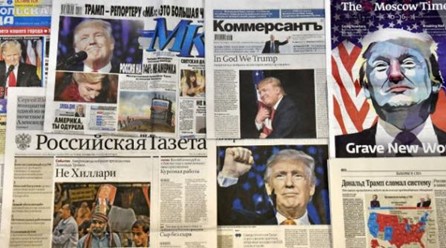 The Washington Post has a history of misrepresenting Ron Paul’s views. Last year the supposed newspaper of record ran a feature article by David A. Fahrenthold in which Fahrenthold grossly mischaracterized Paul as an advocate for calamity, oppression, and poverty — the opposite of the goals Paul routinely expresses and, indeed, expressed clearly in a speech at the event upon which Fahrenthold’s article purported to report. Such fraudulent attacks on the prominent advocate for liberty and a noninterventionist foreign policy fall in line with the newspaper’s agenda. As Future of Freedom Foundation President Jacob G. Hornberger put it in a February editorial, the Post’s agenda is guided by “the interventionist mindset that undergirds the mainstream media.”

On Thursday, the Post published a new article by Craig Timberg complaining of a “flood” of so-called fake news supported by “a sophisticated Russian propaganda campaign that created and spread misleading articles online with the goal of punishing Democrat Hillary Clinton, helping Republican Donald Trump and undermining faith in American democracy,” To advance this conclusion, Timberg points to PropOrNot, an organization of anonymous individuals formed this year, as having identified “more than 200 websites as routine peddlers of Russian propaganda during the election season.” Look on the PropOrNot list. There is the Ron Paul Institute for Peace and Prosperity’s (RPI) website RonPaulInstitute.org listed among websites termed “Russian propaganda outlets.”

What you will not find on the PropOrNot website is any particularized analysis of why the RPI website, or any website for that matter, is included on the list. Instead, you will see only sweeping generalizations from an anonymous organization. The very popular website drudgereport.com even makes the list. While listed websites span the gamut of political ideas, they tend to share in common an independence from the mainstream media.

Timberg’s article can be seen as yet another big media attempt to shift the blame for Democratic presidential nominee Hillary Clinton’s loss of the presidential election away from Clinton, her campaign, and the Democratic National Committee (DNC) that undermined Sen Bernie Sanders’ (I-VT) challenge to Clinton in the Democratic primary.

The article may also be seen as another step in the effort to deter people from looking to alternative sources of information by labeling those information sources as traitorous or near-traitorous.

At the same time, the article may be seen as playing a role in the ongoing push to increase tensions between the United States and Russia — a result that benefits people, including those involved in the military-industrial complex, who profit from the growth of US “national security” activity in America and overseas.

This is not the first time Ron Paul and his institute has been attacked for sounding pro-Russian or anti-American. Such attacks have been advanced even by self-proclaimed libertarians.

Expect that such attacks will continue. They are an effort to tar Paul and his institute so people will close themselves off from information Paul and RPI provide each day in furtherance of the institute’s mission to continue and expand Paul’s “lifetime of public advocacy for a peaceful foreign policy and the protection of civil liberties at home.” While peace and liberty will benefit most people, powerful interests seek to prevent the realization of these objectives. Indeed, expect attacks against RPI to escalate as the institute continues to reach growing numbers of people with its educational effort