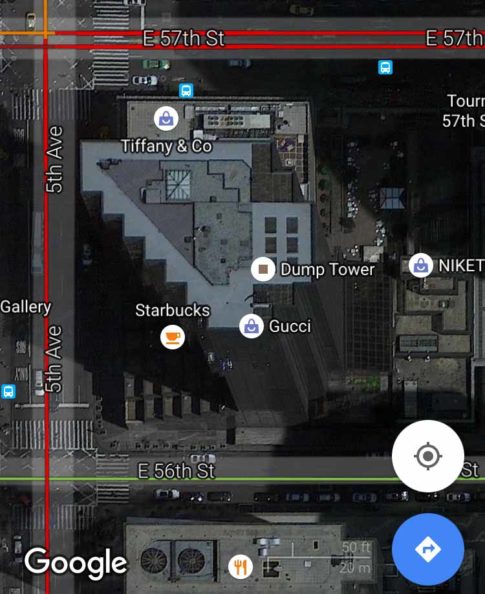 On Saturday night, anyone seeking to find the Trump Tower on Fifth Avenue in New York was met with an unexpected result: the Trump residence and transition campaign HQ was briefly renamed “Dump Tower” on Google Maps. The unofficial new name didn’t last too long, however, with the president-elect’s transition headquarters completely removed shortly after.

Donald Trump, who ealier this morning tweeted his latest opinion on Jill Stein’s push for a recount, has yet to comment on the temporary name change, which under Google’s current procedures would have had to be approved by someone on Google’s side before being displayed on the map.

Speaking to AP, a Google spokesperson explained that the company changed the names back when alerted to the alterations, which had stemmed from “user contributions.” The alternative is that the prank could have been the work of a hacker, hardly a narrative Google would like to embrace.

As RT points out, some Twitter users called the name change apt, as the building was a perfect place to “drain the swamp.”

If you’re looking for an OKish place to use the restroom in New York, check out the aptly named Dump Tower.#DrainTheSwamp in #DumpTower

Others focused on the humorous side of the prank, some saw it as pettiness from the “childish” left.

I seriously don’t know how much more childish the left can get, seriously. #dumptower

January 20th can’t come soon enough! All the smugness and laughter is going to turn into reality for all the liberals!! #dumptower

In 2015, Google apologized after racist search terms including “n*gger house” and “n*gger king” returned the White House when searched for in the Washington DC area. “Some inappropriate results are surfacing in Google Maps that should not be, and we apologize for any offense this may have caused. Our teams are working to fix this issue quickly,” a spokesperson said at the time.