Sales and traffic at U.S. brick-and-mortar stores on Thanksgiving Day and Black Friday declined from last year, as Reuters reports that stores offered discounts well beyond the weekend and more customers shopped online.

The National Retail Federation reports that spending per person over Thanksgiving Weekend this year was $289.19, down 3.4% from $299.60 in the same period last year.

Internet sales rose in the double digits on both days, surpassing $3 billion for the first time on Black Friday, according to data released on Saturday.

Data from analytics firm RetailNext showed net sales at brick-and-mortar stores fell 5.0% over the two days, while the number of transactions fell 7.9%.

Reuters report that ShopperTrak data highlights the waning importance of Black Friday, which until a few years ago kicked off the holiday shopping season, as more retailers start discounting earlier in the month and opened their doors on Thanksgiving Day.

“We knew it (holiday season) was going to be off to a slow start,” Shelley Kohan, vice president of retail consulting at RetailNext, said.

“The first couple of weeks with the election were a complete distracter from the normal course of business and…a warmer climate in November may have made the sales more stubborn,” she said, adding that she saw sales picking up in December.

Net sales on Black Friday slid 10.4 percent for brick-and-mortar chains, according to RetailNext.

“Stores that opened on Thursday were not very busy on Black Friday,… and while the Thanksgiving Day opt-outs were busier on Black Friday, they didn’t see the crowds they saw in previous years,” NPD group’s Chief Industry analyst Marshal Cohen said.

It seems everyone is after a deal…

“Over one-third of shoppers said 100 percent of their purchases were on sale,” NRF Chief Executive Officer Matthew Shay said in a statement. 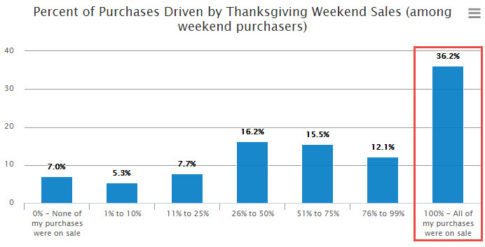 That increased more than threefold from last year.

While mainstream economists will tout unemployment rates hitting their lowest in eight years in October and hourly wages this year saw their biggest increase since 2009, boosting consumers’ confidence and spending; it appears the reality is – once again – that these aggregate data do not reflect reality across a divided America, as Gallup reports overall holiday spending plans have plunged in 2016… 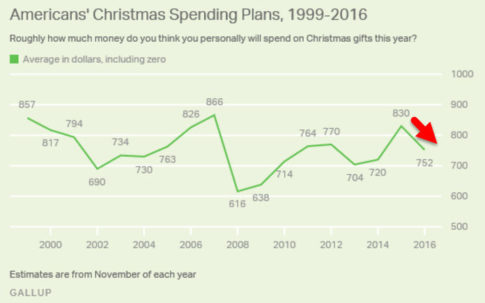