– Sweden: Muslim migrants given preference over Swedish families for housing:

Never mind the law-abiding Swedish citizens who are in need of a home. And it isn’t just Swedish politicians who are forcing this excessive burden onto the backs of their citizens. Recently in Germany, a Muslim refugee from Syria with four wives and 23 children claimed $389,000 in a year in benefits.

Sweden continues its downward spiral as a nation. It is:

plagued with increasing levels of violence and criminal activity, with three police officers quitting each day, is experiencing chronic housing shortages as a result of the country’s generous asylum and migration policies over the last decade.”

Yet despite the mayhem, and the fact that Sweden has reportedly become an exporter of jihad, according to a BBC report, Social Democratic Party councillor Helena Proos said: “We are in a tough position because there are very many people who are looking for housing, but we have an obligation to provide housing for newly arrived refugees.”

Though elected by Swedes, Proos apparently feels no “obligation” to protect Swedish citizens. 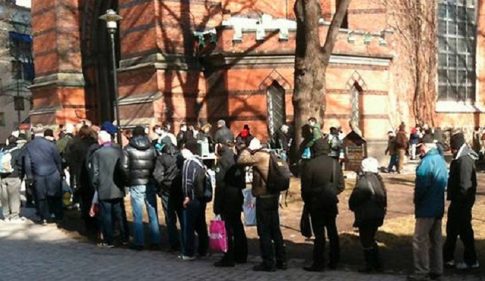 Earlier this month Express.co.uk reported several councils in the Scandinavian country are prioritising the requests of asylum seekers ahead of their own citizens, with migrants given housing straight away, despite Swedes being placed on a huge waiting list.

Now 20 accommodations in Klippan, in south Sweden, are being prepared for migrants after a new policy demanded all available apartments owned by the municipal property company be put aside for asylum seekers.

The move has been criticised by Therese Borg, of the Swedish Democrats (SD) party, as she argued the migrants should be placed on the list and wait their turn.

Ms Borg said asylum seekers urgently needed to be placed on the list alongside regular people because hardworking citizens risked growing resentful of the preferential treatment.

She told Nyheteridag: “You can see a lot of comments on Facebook. People are p****d off.

“There are a lot of teenagers living at home and who are looking for [a small apartment] to move into as it is a good place to start [building a life].

“You can’t move out and apply for something larger when you can’t afford it.

“The small apartments are necessary for [the youth] moving out, but they are not offered them unless the newly arrivals decline to take the property.” ….

Lashing out against the Government and Migration Board, Ms Borg demanded they take responsibility for the migrants they have allowed into the country.

However, Bert-Inge Karlsson, of the Christian Democrats, blasted Ms Borg’s comments as he insisted her portrayal of the situation was out-of-touch with reality.

Mr Karlsson said: “I [question] the way Theresa Borg has portrayed it as if we have an extraordinary housing crisis in the nation. How is it then possible for us to take in so incredibly many.

“She has returned to the kind of insinuation… which suggests the entire world could be on its way here.”

The turmoil nation, which has been plagued with increasing levels of violence and criminal activity, with three police officers quitting each day, is experiencing chronic housing shortages as a result of the country’s generous asylum and migration policies over the last decade.