Remember back in 2012 when the Supreme Court narrowly upheld the Obamacare mandate with a 5-4 decision but only after Judge Roberts, a Bush appointee, seemingly parted with his conservative counterparts on the bench to effectively, single-handedly preserve perhaps the most destructive piece of legislation in American history (if not, we wrote about it here)?  Many people were shocked by Judge Roberts’ decision and subsequently alleged that it was driven more by politics than his interpretation of the Constitution.

Turns out those people were proven right today as a new Podesta email confirms that the Obama administration applied political pressure on Roberts to sway his decision:  “it was pretty critical that the President threw the gauntlet down last time on the Court…that was vital to scaring Roberts off.”

While it’s fairly disturbing that the Clinton team would flippantly admit such things, what’s even worse is that they plotted to use Obama’s same strategy of applying political pressure on the Supreme Court in 2015 to overturn “King v Burwell” which also threatened Obamacare’s future.

The email below from Neera Tanden, clearly shows Clinton staffers colluding with the President of the Center for American Progress on a scheme to apply political pressure on the Supreme Court to overturn the challenge. 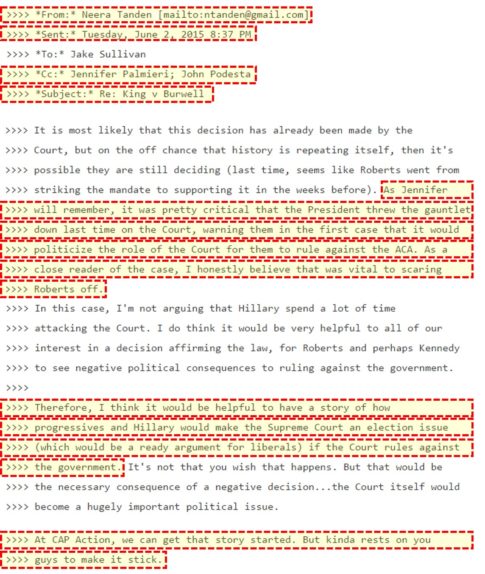 Of course, the Supreme Court ultimately ruled in favor of the Obama administration with Justice Roberts writing the majority opinion.  Meanwhile, the late Justice Scalia wrote the dissenting opinion in which he said the following:

In hindsight, aren’t we all so lucky that Justice Roberts sold his soul to uphold such an amazing piece of legislation?  For his efforts, we’ve all received the benefits of worse healthcare coverage for twice the price.