An email released in the recent Wikileaks dump laid out Democrat presidential nominee Hillary Clinton’s real plan for the future — and it didn’t include justice, equality or fairness. Instead, Clinton’s plan for the future revolved around maintaining political power while working to create an “unaware” and “compliant” citizenry.

The email came from Bill Ivey, who was appointed Chairman of the National Endowment for the Arts during President Bill Clinton’s second term. It was sent to Hillary Clinton’s campaign chairman John Podesta on March 13, 2016.

In the email, Ivey considered how Clinton could fight against Trump’s appeal and suggested that simply falling back on previous policies wouldn’t work.

“And as I’ve mentioned, we’ve all been quite content to demean government, drop civics and in general conspire to produce an unaware and compliant citizenry,” he said.

Ivey admitted how the left has made secret plans to make the public oblivious to their devious plans, but he realized the public isn’t easy to manipulate, which is problematic for Democrats. Unawareness among voters, he insinuated, was a positive for Clinton and the campaign she is running.

This email confirmed what Democrats like Clinton have in mind for the American public. Clinton loves to claim that her vision of America includes one where everyone is treated the same way, but she is only saying what she thinks the public wants to hear.

You can read the pertinent excerpt here: 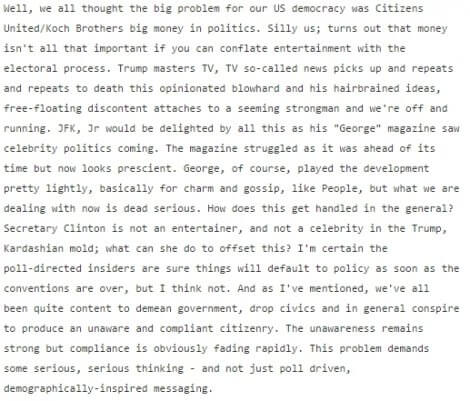 This email, as well as many others, demonstrate what Clinton actually thinks of American citizens, and it isn’t good. In fact, it strongly supports her “deplorable” remark a few weeks ago.

That is exactly what she wants, and we cannot let it happen. Clinton will utterly destroy what is left of the America we know and love.Share this story on Facebook and Twitter and let us know what you think of Clinton’s plan for a compliant citizenry.

Do you believe Hillary Clinton would destroy America if elected president? Scroll down to comment below!