According to a 2014 report by the Federation of American Scientists, Israel is believed to possess between 80 and 400 nuclear weapons, but the authors guessed the actual number was closer to 80 than 400.

Powell’s email, sent on March 3, 2015, more than doubled that approximation. As a former chairman of the joint chiefs of staff, his figure of 200 nuclear weapons would appear to carry more weight than the approximations of the “news media reports, think tanks, authors, and analysts” cited in the FAS report.

A trove of Powell’s emails was posted on the website DCLeaks.com and first reported by Buzzfeed News late Tuesday. Powell, 79, did not deny the emails’ authenticity when asked for comment by Buzzfeed.

Gross continues, “The emails, which run from March 2015 through last month, offer rare insight into the unvarnished opinions of the respected retired US Army general, who was secretary of state under President George W. Bush.

DCLeaks.com has been alleged to be an outlet for hackers tied to the Russian intelligence groups. The website, which says it intends to expose the misuse of political power, has previously released emails from other Washington political figures.”

In the leaked emails, Powell also bashed both Donald Trump and Hillary Clinton, and spoke frankly about a number of issues related to the US government.

However, his March 3, 2015, email dealt specifically with the Iranian nuclear deal and Netanyahu’s controversial speech to Congress that day about it.

Powell told Leeds, his business partner, that he had watched “parts of it,” and that is was “well done, but nothing new. I could have mouthed it.”

He disagreed with  Netanyahu on several points in the speech. According to Powell, the Iranians “can’t use [a nuclear bomb] if they finally make one,” because of Israel’s overwhelming arsenal.

“As Akmdinijad (sic) [said], ‘What would we do with one, polish it?’” he wrote, referring to former Iranian president Mahmoud Ahmadinejad.

Powell said that while all his “buddies” in Abu Dhabi wanted an Iranian nuclear deal and had been working for over a decade to reach one, he was unconvinced.

“I don’t trust Iranians — almost went to jail over Iran-Contra,” he wrote, referring to a political scandal in the United States in the late 1980s, in which American officials were caught facilitating weapons sales to Iran, despite an arms embargo.

Powell also cast doubt on the amount of time that Netanyahu and others estimated that it would take Iran to develop a nuclear bomb.

“Bibi likes to say ‘a year away,’ as do our intel guys. They say it every years (sic),” Powell wrote.

Powell has confirmed what most of the world believed about Israel’s nuclear weapons, he also narrowed down the number so we now know how many that likely have. Why is Israel allowed to have so many while Iran has much harsher regulations and is not allowed to have them? Both countries seem to be led by terrorists. 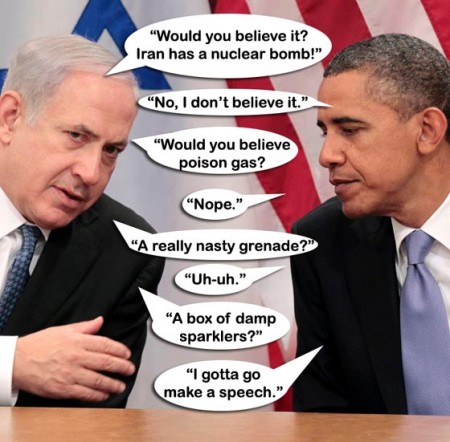