– Turkey Slams US Comments That Its Bombing Of US Allies “Is Unacceptable” Are “Unacceptable”:

Yesterday, as the fallout from the latest Turkish incursion into Northern Syria was being digested and the US realized that far from an expansion in Ankara’s campaign on ISIS, Erdogan was merely using the Islamic State as a pretext to expand his war against the Kurdish militia, known as YPG – which also happens to be a part of the broader US-backed Syrian Democratic Forces (SDF) coalition – the DoD  said that “we want to make clear that we find these clashes — in areas where [ISIS] is not located — unacceptable and a source of deep concern.” 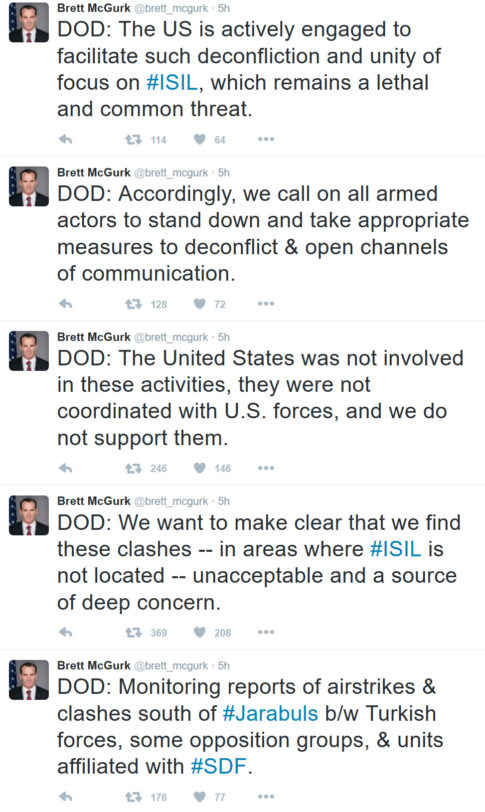 24 hours later Turkey responded, saying that the US comments that Turkey’s clashes in areas where ISIS is not located “are unaccpetable”, are themselves unaccpetble, and that the US should just ahead and mind its own business.

BREAKING Turkish MFA: US comments on scope and targets of #EuphratesShield op in Syria are unacceptable. pic.twitter.com/z9EUXkuXGv

Specifically, Turkey’s Foreign Ministry Spokesman Tanju Bilgic said in a written statement on Tuesday that comments on Turkey’s operation in Syria by U.S. officials including the secretary of defense, White House spokesman, and special envoy for the fight against Islamic State are “unacceptable” adding that the goal of Turkey’s “Euphrates Shield” operation in Syria is clear: to bring the scourge of terrorism to a level that it no longer disturbs Turkish citizens.

The problem for the US is that among the terrorist Turkey also now officially counts America’s “allies” the YPG.

And so, Joe Biden’s appeasament attempt last Wednesday when he arrived in Turkey to show support for Erodgan, and which as we dubbed would be quickly seen as a humiliation, is now an even greater humiliation for US foreign policy.