Deutsche Bank’s war of words with the ECB is not new: it was first unveiled in February when, as we wrote at the time “A Wounded Deutsche Bank Lashed Out At Central Bankers: Stop Easing, You Are Crushing Us.” Europe’s largest bank, with the massive derivatives book, then upped the ante several months later in June, when its chief economist Folkerts-Landau launched a shocking anti-ECB rant in which it warned of social unrest and another Great Depression.

Ironically, these infamous diatribes hurt more than helped: telegraphing to the market just how hurt DB was as a result of the ECB’s monetary policy, the market punished its stock, which has been recently trading within spitting distance of all time lows, in effect making Deutsche Bank’s life even harder as it now has to contend not only with its own internal profitability problems, but also has to maintain a market-facing facade that all is well. So far, it has not worked out very well, prompting numerous comparisons to another infamous bank. 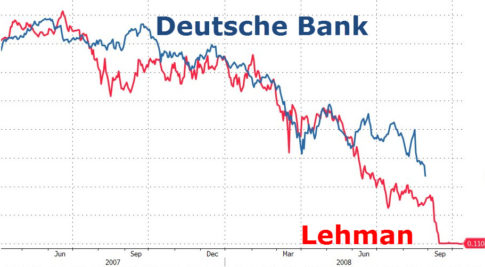 So, in what may have been DB’s loudest cry for help against the ECB’s unwavering commitment to rock-bottom interest rates, the bank’s CEO, John Cryan, warned in a guest commentary ahead of the Handelsblatt Banking Summit titled, appropriately enough “Banks in Upheaval”, to be held in Frankfurt on August 31 and September 1, that “monetary policy is now running counter to the aims of strengthening the economy and making the European banking system safer.“

However, his most striking warning was not aimed at Mario Draghi, but at Germany itself – and ostensibly his own clients – implicitly suggesting that if Deutsche Bank goes down it is taking everyone down with it, when, as cited by Bloomberg, he warned of “fatal consequences” for savers and pension plans while “companies refrain from investments due to ongoing uncertainty and demand less loans.” 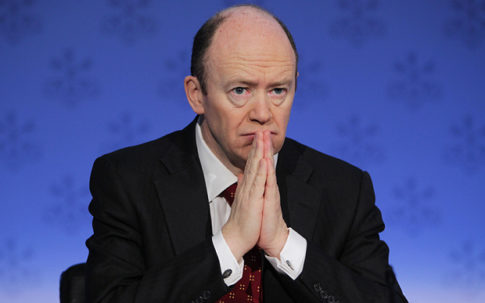 The details are known to those who have followed the paradox of central bank failure – if only for the economy and ordinary people –  summarized earlier today by Citi’s Matt King.

Quoted by Handelsblatt, Cryan warned that “the ECB’s policy is squeezing the margins of Europe’s struggling banks, making it harder for insurers to find profitable investments and dangerously distorting financial market prices.” Meanwhile, he added, the hoped-for benefits haven’t materialized. “Given the continued uncertainty, companies are holding back on investments and are hardly seeking any credit anymore,” he wrote.

He added that it was unacceptable that financial regulators demanded that banks increase their safety cushions but then imposed punitive interest rates on these additional reserves.

Many agree with Cryan:”The hoped for pan-European investment boost hasn’t happened, and neither have the expected structural reforms in the affected euro member states,” said Georg Fahrenschon, president of the German Savings Bank Association. Instead, uncertainty is growing throughout the euro zone in light of the “horrendous sums of money the ECB is now directly pumping into the markets,” he added.

While Cryan admits that the ECB’s intervention did avoid an all out collapse in Europe it has done so at extreme costs, like negative rates on most German debt. Which is why, Cryan writes it is high time for a change in direction at the ECB. He would say that: his bank is in the midst of a painful restructuring and battling to keep the confidence of investors, so the side effects of the ECB’s policy are causing it particular pain. That’s one reason why Mr. Cryan is particularly critical of the negative interest rate on bank deposits at the ECB. He said net interest income, traditionally the most important pillar of bank earnings in the euro zone, had fallen by 7 percent since 2009.

Martin Lück, strategist at Blackrock, the world’s largest asset manager, agrees with Cryan and fears that the ECB’s actions are having the opposite effect of the spending spree intended. With interest rates falling, people have to save more rather than less to secure their pensions. And the punitive banks are weakening banks and forcing them to curb their lending, he said. Insurers and pension funds were also being hit because they had to enter ever higher risks to secure returns on their investments. This has become evident with the slide in yields into negative territory on many sovereign bonds including 10-year German government paper. These securities are the backbone of the insurers’ investments.

Private investors face the same problem. If they don’t want to take higher risks, for example by investing in stocks, “then they must save substantially more than before to secure their pension,” said Frank Engels, head of fixed income fund management at Union Investment.

Meanwhile, the beneficiaries of the ECB’s asset reflation policy are few: only around nine million Germans own stocks, just over 10 percent of the population. The risk is now that savings will lie dormant in bank accounts without earning interest. Germany’s central bank, the Bundesbank, has calculated that Germany had a savings ratio of 9.7 percent for 2015, the highest level since 2010, and it’s likely to rise further in 2016. In the first quarter it was up 0.2 percentage points above the year-earlier level.

Worse may come if Cryan’s fatalistic warning comes true: after all, few CEOs ever talk of “fatal consequences”, especially since the context of these words has become so very clear.

So what, according to the CEO, is the only lifeline available to European banks, and to savers, in Europe? In his guest comment, Cryan said that an EU banking union was an important step that should be followed by a capital markets union, which become more important in order to provide the much needed funding for companies as banks shrink their balance sheets. In short, a continent-wide backstop system.

The warnings for savers could not be any clearer.