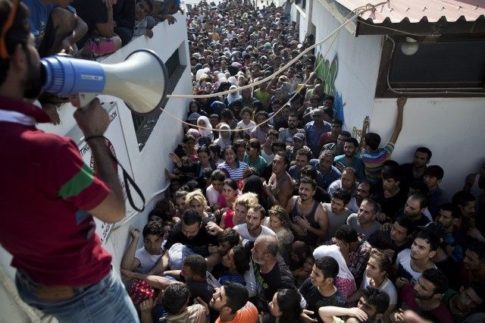 – Greece Calls On EU For Help With Huge Migrant Population:

The Greek migration minister has called out to the European Union (EU) to help his country handle the tens of thousands of migrants stranded in Greece, claiming the country cannot handle them all alone.

Greek Migration Minister Ioannis Mouzalas made it clear his government cannot handle the sheltering and feeding of an estimated 58,000 migrants by themselves and are appealing for the EU to help. Mr. Mouzalas said that Greece was ready to send 7,000 migrants to other EU states in order to relieve some of the pressure on the Greek government that is still racked with austerity measures and high unemployment. While the EU states are legally bound to help, the minister has claimed so far none have answered his calls, reports Zeit Online.

Minister Mouzalas has reacted to the inaction by announcing that he will travel across Europe to visit individual countries in attempt to garner support for the transfer of the migrants.

Last year the European Union council decided to go ahead with the redistribution of migrants from Greece and Italy, the two countries where migrants often first enter the political bloc. Although the motion was soundly rejected by central European nations, the plan passed the council.

So far only around 4,000 migrants have been relocated under the plan, which came into effect in May of this year, with Slovenia taking the first 30 migrants. Of the central European countries, Hungary has emerged as the leader of opposition toward the relocation of migrants. Hungarian Prime Minister Viktor Orban has slammed the EU migrant policy and his government will hold a referendum on October 2nd to determine if the Hungarian people want to take in any more migrants.

Among the almost 60,000 migrants stuck in Greece there are, according to Mouzalas, some 4,000 migrants that have totally vanished and cannot be accounted for. European police agencies are still on high alert for the potential of Islamic State fighters that may have come into Europe among the migrant population.

The Greek government has also released figures that show some 75 per cent of all the migrants currently in Greece will likely qualify for asylum status.

While the European Union migrant deal with Turkey was supposed to allow Greece to easily deport failed asylum seekers, the actual numbers of deportations have been quite low, as most migrants have chosen to apply for asylum in Greece and likely hope that through the redistribution system they may end up in Northern Europe where they had originally intended to travel.