The tragedy of Venezuela continues unabated, but that doesn’t mean the government of President Nicolás Maduro has stopped trying to fix problems like the devastating scarcity of food which has led to malnutrition, riots, food truck hijackings, vigilante lynchings of petty thieves, and the starvation of zoo animals.

No, Maduro hasn’t admitted the failure of Chavismo — the brand of Bolivarian socialism imposed on the oil-rich country by his late predecessor Hugo Chavez — instead, Venezuela’s embattled leader has launched a war on “anxiety.”

The National Superintendency of Fair Prices has reportedly instituted a policy of fining bakeries that allow lines to stretch out their front doors, according to PanAmPost. The head of this particular bureaucracy, William Contreras, claims the lines aren’t a true indicator of a severe shortage of bread, but rather, a political “strategy of generating anxiety.”

But this is indicative of the magical thinking of Venezuela’s socialist government: the breakdown of the economy couldn’t possibly because of failed economic policy, and scarcity must be the result of a greater conspiracy. 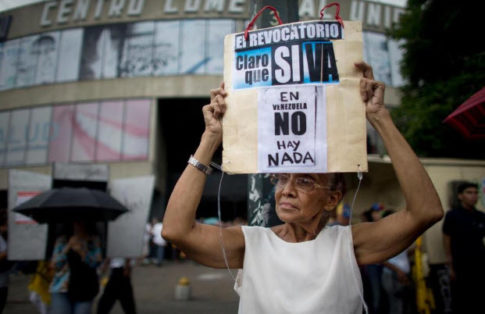 Contreras was also quoted by El Tiempo as saying the long lines represented “fairly clear political intentions and purposes” such as “destabilizing the economy and break[ing] the morale of the people.” This is in keeping with Maduro’s deflection of the blame he deserves for destroying Venezuela’s economy, which he puts at the feet of U.S.-backed agitators engaging in “economic war” by keeping things like toilet paper off supermarket shelves.

Even in a time of crisis when infants are dying in electricity-deprived hospitals, Maduro insisted on putting on a brave face and keeping with his government’s practice of lavishly asinine spending by dropping over $400,000 on a week of celebrating the 90th birthday of the president of another impoverished Latin socialist nation — Fidel Castro.

This whole battle over both the cause and greater meaning of long lines at bakeries must come as a shock to former presidential candidate and noted democratic socialist Bernie Sanders, who once argued that bread lines in socialist or communist countries were a “good thing” because they proved that everyone is suffering equally.

Meanwhile, a major rally by the Venezuelan opposition which is calling for Maduro’s recall is scheduled in Caracas for September 1. 80 percent of the Venezuelan people reportedly want Maduro to be removed from office.