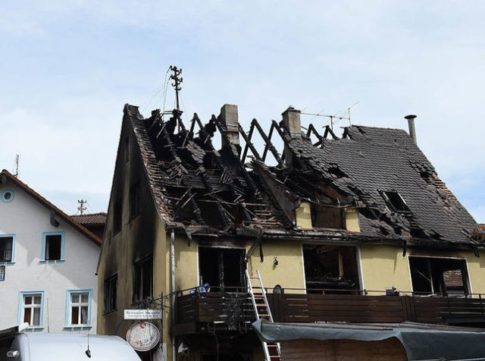 Two migrants set fire to their asylum accommodation in Germany after smoking a hookah water pipe which resulted in the hot coal setting the home ablaze.

The fire, which erupted in the early hours of Saturday morning has left the eight asylum seekers who lived there without a home. According to police all eight migrants, including three children were able to escape the fire before anyone was seriously injured. Over 200 emergency personnel from fire fighters to police and paramedics were needed on the scene due to the severity of the fire and to prevent it from spreading to nearby buildings.  Authorities have estimated that the total cost in property damage could amount to more than 100,000 euros.

Authorities say that the fire first started in a storage area on the ground floor. Two Syrian migrants were suspected of starting the fire and arrest warrants were issued for the pair.

Once arrested each had a conflicting story as to what happened. Police had first suspected possible “xenophobic” motives behind the blaze. Breitbart London has previously reported that many of the so-called “xenophobic attacks” on asylum homes are as little as a rock thrown at a window or a “propaganda attack” in which anti-migrant slogans are posted on the buildings.

Police have confirmed that they suspect the two Syrians of arson due to negligence and unlike many migrants who commit crimes they will not be released before their trial.

Breitbart London reported on a high profile case of arson  by migrants that occurred earlier this year in Dusseldorf. The migrant who set fire to his asylum is understood to have done so because he had not been woken up in time to eat before fasting for Ramadan. During the Ramadan holiday Muslims must fast during daylight hours and many eat before sunrise as well as at night.

Another arson at an asylum home earlier this year in Germany appeared to be a more clear cut case of right-wing extremism. An asylum home that was burned down in Bingen am Rhein was found to have had swastika graffiti on the walls. Investigators later discovered that the man who carried out the arson was in fact a Syrian asylum seeker who had planted the swastikas on the walls to frame neo-Nazis and fool the police.