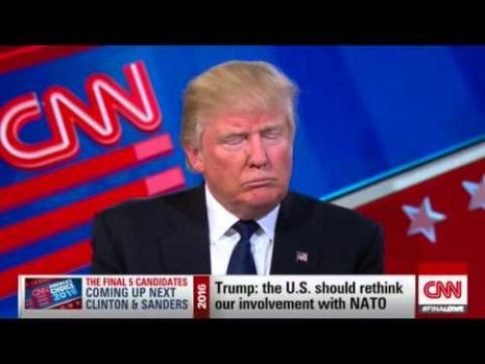 – Trump Sparks “Wave Of Alarm” Across Europe After Warning US May Not Help NATO Members:

Having entertained America for the past three days, overnight Donald Trump’s rhetoric crossed the Atlantic and as the FT puts it, “has sparked a wave of alarm across Europe” as well as calls for solidarity from the head of NATO after warning that the US might not come to the defense of an alliance ally under attack from Russia if that country had not fulfilled its obligations to America. 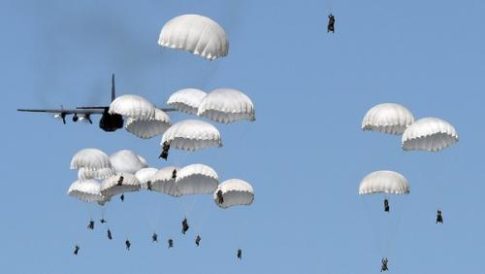 The Trump statement in question that has provoked dread across Europe’s NATO member states, came from the following NYT interview, excerpted below, in which the presidential candidate was asked whether he would defend the Baltic states in the face of Russian aggression if he were president. “If they fulfil their obligations to us, the answer is yes,” Mr Trump said.

SANGER: I was just in the Baltic States. They are very concerned obviously about this new Russian activism, they are seeing submarines off their coasts, they are seeing airplanes they haven’t seen since the Cold War coming, bombers doing test runs. If Russia came over the border into Estonia or Latvia, Lithuania, places that Americans don’t think about all that often, would you come to their immediate military aid?

TRUMP: I don’t want to tell you what I’d do because I don’t want Putin to know what I’d do. I have a serious chance of becoming president and I’m not like Obama, that every time they send some troops into Iraq or anyplace else, he has a news conference to announce it.

SANGER: They are NATO members, and we are treaty-obligated ——

TRUMP: We have many NATO members that aren’t paying their bills.

SANGER: That’s true, but we are treaty-obligated under NATO, forget the bills part.

TRUMP: You can’t forget the bills. They have an obligation to make payments. Many NATO nations are not making payments, are not making what they’re supposed to make. That’s a big thing. You can’t say forget that.

SANGER: My point here is, Can the members of NATO, including the new members in the Baltics, count on the United States to come to their military aid if they were attacked by Russia? And count on us fulfilling our obligations ——

Trump’s statement quickly drew condemnation by commentators for suggesting NATO is merely a “protection racket”, provoked a just as concerned response from NATO secretary-general Jens Stoltenberg who said that while he did not wish to interfere with the US election campaign, “solidarity among allies is a key value for Nato.”  He added that “This is good for European security and good for US security. We defend one another. We have seen this in Afghanistan, where tens of thousands of European, Canadian and partner nation troops have stood shoulder-to-shoulder with US soldiers.”

“Two world wars have shown that peace in Europe is also important to the security of the United States,” Mr Stoltenberg added.

The Obama administration shot back just as quickly. “There should be no mistake or miscalculation made about this country’s commitment” to the North Atlantic Treaty Organization, White House spokesman Josh Earnest said Thursday in response to Trump’s remarks in a New York Times interview. “The U.S. commitment to that pledge is ironclad.”

Retired U.S. Army General Wesley K. Clark, a former NATO supreme allied commander who sought the Democratic presidential nomination in 2004, criticized Trump for stopping short of fully guaranteeing the security of all alliance members.  “When Mr. Trump says he’ll only consider action, he is joining a long list of failed statesmen and leaders from decades ago, whose ‎hesitancy, wavering, and lack of resolve,” Clark said in a statement. “Mr. Trump may know something about buildings and real estate – but he has a lot to learn about how the world really works.”

Trump’s stance on what a US-NATO relationship should look like is hardly new, as Trump has previously stated that he deems it unfair that the US shoulders a disproportionate amount of NATO’s funding costs and has been urging to reduce US involvement in foreign affairs.  Trump’s readiness to reject a decades-long commitment to defend allies deepens his criticism of NATO after he called it “obsolete” in April while campaigning for the nomination. The billionaire’s comments come less than two weeks after the NATO leaders agreed at their Warsaw summit to enhance deployment of forces in Poland, Lithuania, Estonia and Latvia as a deterrent following Russia’s 2014 annexation of Crimea from Ukraine.

Stoltenberg noted that European members of the alliance were increasing defence spending, contrary to Trump’s earlier criticism that other Nato countries were relying on the US. “For the first time in many years, defence spending among European allies and Canada rose last year. And this year we expect a further increase,” he said.

Others were just as defensive.  In fact, in what will come as music to the ears of the US military-industrial complex, Dalia Grybauskaite, Lithuania’s president, told journalists that  “Lithuania — as well as other Baltic states — is doing everything it can. We are modernizing our armed forces, we have reinstituted conscription and our defense spending will reach 2 per cent of GDP in 2018. I do not think interpretations of candidate Trump’s remarks are necessary. We know that the US will remain our most important partner.”

Other Baltic States chimed in: Toomas Hendrik Ilves, Estonia’s president, wrote on Twitter without reference to Mr Trump: “Estonia is [one] of five Nato allies in Europe to meet its 2 per cent defence expenditure commitment. Fought, with no caveats, in Nato’s sole Article 5 [operation in Afghanistan]”.

Trump’s remarks are “both dangerous and irresponsible,” Ojars Kalnins, who chairs the foreign affairs committee in Latvia’s parliament, said in an interview with Latvian radio Thursday. “This won’t be good for NATO unity or the security situation. In principle, he is saying the U.S. will not fulfill its promises or obligations.”

“If Trump doubts NATO solidarity in the case of Article 5, then his election is dangerous for Baltic security,” Artis Pabriks, a former Latvian foreign and defense minister who’s now a member of the European Parliament, said on Twitter.

While Trump had already sparked concern previously among many US allies, including the other members of Nato and countries such as Japan and South Korea, that he would adopt an isolationist stance that would dramatically affect a series of relationships that most experts argue have provided for security in Europe and Asia, his latest comments went further than his previous controversial remarks that he would consider reducing the US role in a military alliance that has formed the bedrock of the transatlantic security relationship for decades.

Speaking just days after Turkish President Recep Tayyip Erdogan launched a crackdown on dissent following an attempted coup, Mr Trump also said in the interview that he would not interfere when countries did not uphold civil rights — a move that would signal a marked shift from the stance adopted by Republican and Democratic administrations.

Saying the US had to fix its own internal problems, including the fact that police officers have been killed in a recent spate of attacks, Mr Trump added: “I don’t think we have the right to lecture [other countries] . . . How are we going to lecture when people are shooting policemen in cold blood?”

At its core, the Nato tension is the result of fears that “Russia would invade the Baltics” and which supposedly justifies the recent dramatic expansion fof NATO forces in eastern Europe, culminating with the recent NATO summit which determined that Russia was the biggest threat to the region. Ironically, this happened just days after another scandal eruptd inside Nato after Germany’s foreign minister suggested that the Russian response has been merely in retaliation to NATO provocations: “What we should avoid today is inflaming the situation by warmongering and stomping boots.”

While it remains to be seen if Trump’s foreign policy is just another “dramatic” episode, or if the Donald genuinely wishes to reincarnated a gentle version of the Monroe doctrine, we are confident that the US military industrial complex is following the story with great concern because if Trump were to be able to implement a “de-escalation” policy, the biggest losers would be US defense and military companies.

In an amusing twist, the Nato comments come on the heels of reports that the Trump campaign forced the Republican team developing the party platform for the convention to remove language supporting the provision of weapons to Ukraine to fight Russian forces. In a short speech on the sidelines of the convention, John Kasich, the Ohio governor who was one of the final two rivals to Mr Trump, said he was concerned at the reports.

Trump has been criticised in the past by Republican foreign policy experts for comments that suggested he admired Putin for being a strongman. In the interview, Trumps said that “Putin and I will get along very well,” and that he’d love a good relationship between the U.S. and Russia so that “instead of fighting each other we got along.” He also said he wouldn’t “lecture” NATO ally Turkey about purges of political adversaries or crackdowns on civil liberties after the attempted coup in that country, saying the U.S. had first to “fix our own mess.”

The FT stopped short of accusing Trump of being a Kremlin spy.