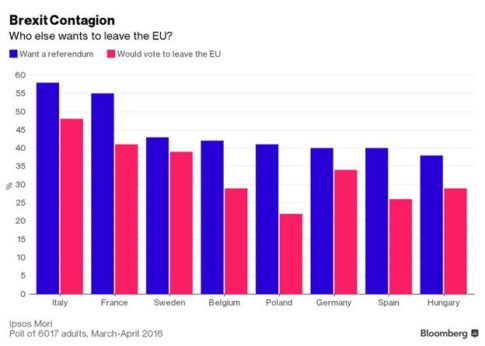 With Hollande’s approval rating at about 11%, and Merkel lucky she is not tarred & feathered, the Front National leader Marine Le Pen has pledged to hold a French referendum. Hollande rejected Le Pen’s call for a refendum today during their meeting; prompting the following from the leader of France’s far-right National Front party:

“We will see at the presidential election (next year) which candidates commit to organize a referendum.

You know I am one of those because for the past four years now I’ve said that six months after being elected, I would organize a referendum on the exit (of France) from the European Union, and that I would use these six months to negotiate with the European Union its transformation into a Europe of the nations, giving back to the French people four essential elements from its sovereignty: territorial, economic, monetary-budgetary and legislative.“

Therefore, if LePen emerges victorious in next year’s presidential elections, that means the next major player in the EU after Germany is out and there goes the EU.

This entire civil uprising in Europe is underway ever since two months ago when Dutch voters overwhelmingly rejected a Ukraine-European Union treaty. Angela Merkel’s Germany now faces having to pay an extra 3 billion euros a year to the annual EU budget once Britain leaves.

This alone is prompting German government officials to propose that Britain is offered “constructive exit negotiations” to keep their dues coming in. Some are now talking about a quasi-membership for the UK calling it an “associated partner country” to keep the money flowing.

Yet the French government of Hollande just does not understand. The governor of the French central bank will exert pressure on UK banks. They are taking the view that it would be paradoxical if Britain could retain privileges after the withdrawal from the EU. First Banks are preparing apparently preparing to shift part of its employees in London to the continent. They obviously fail to grasp that it is European continental banks that are on the brink of collapse – not British.

Italian ministers warned on Saturday that the European Union MUST change course or risk total collapse after Britain’s vote to leave the bloc. The Italian  Finance Minister Pier Carlo Padoan said. “A double reaction to Brexit is under way, one financial, one political. The financial one, at least until now, is limited. I am more worried about the political one.”

Indeed, the unthinkable is happening. And they worry the pound might crash? Pay attention to the euro.

Furthermore, Portugal, with all eyes on Spanish elections, has made a clear threat to The EU (via WSJ)…

A key ally to Portugal’s Socialist government said the country should consider holding a referendum on the European Union membership if the EU decides to impose sanctions over last year’s missed budget target.

While Portugal’s Socialist party is deeply pro-EU and calling a referendum would be highly unlikely, Left Bloc’s move puts pressure on the government and Prime Minister António Costa, as well as the European Commission, which is awaiting Spain’s election results to decide whether both countries should be sanctioned after their deficits ended above a 3% of gross domestic product threshold.

While the Communists are openly anti-EU, the Left Bloc has said the EU must change, but not necessarily dissolve.

In other words, if The EU dares to presure Portugal over its fiscal excess, then Portugal will leave.

And finally, for now, as if to reinforce the fears of EU dissolution, Slovakia’s far-right People’s Party launched a petition for a referendum on the country’s future in the EU.

“Citizens of Great Britain have decided to refuse the diktat from Brussels. It is high time for Slovakia to leave the sinking European ‘Titanic’ as well,” the party said.

Meanwhile, as Armstrong concludes, another critic of the EU has been the leader of Poland’s ruling party. Poland’s Foreign Minister Witold Waszczykowski also now responded and said that the UK referendum result shows the need for reform of the EU. “This is bad news for Europe, for Poland. (…) This is a great dilemma for the eurocrats, we all want to keep the EU, the question is in what shape.” He continued: “We will be trying to use this situation to make the European politicians aware why this happened. And it happened because this concept, which was created some time ago, is no longer popular in Europe.”

Then again, the Hungarian Prime Minister Viktor Orbán intends to campaign in the British press for the UK to remain in the EU, according to a Hungarian government spokesman. Orbán is clearly one of those who is out of touch with the people and fails to understand that a federalized Europe is not going down very well with the people. He is extremely arrogant to think that he has any right to intervene or suggest that the vote be ignored.

To add insult to injury, Turkey proclaims the “Crusader union falls apart” demonstrating that memories in Europe go back centuries. The United States people did not want to enter World War II. Roosevelt even traveled to Boston promising that American boys would never defend Europe. Boston was a very Irish community and they were upset at being asked to defend Britain after their migration to the USA because of Britain. Old wounds never quite die.

European integration is again under existential threat. And while disintegration will likely unfold over the coming years, a crisis of confidence in the markets could erupt at any point.

Confidence in Europe’s banks is faltering badly. I believe faith in the ECB’s capacity to hold the banks and securities markets together is waning.

How much leverage has accumulated throughout European periphery bond markets? And it is a harsh reality of Europe’s financial structure that de-risking/de-leveraging dynamics tend to see rising yields/widening spreads intensify market fears of bank impairment. Then bank worries further negatively impact sentiment in the markets and business community in a problematic vicious spiral.