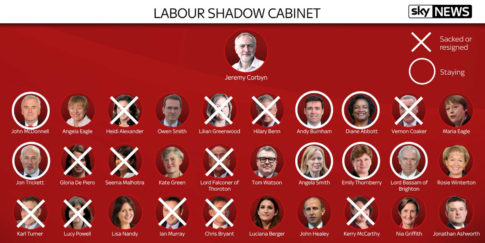 Update: Labour leader Jeremy Corbyn has said he will not step down, adding he will not “betray the trust” of those who elected him, according to Sky News.

CORBYN STATEMENT: says he’s not going anywhere and he will be a candidate in a leadership election pic.twitter.com/El6CoL26Ns

As we detailed earlier…

“Jeremy [Corbyn] is a good and decent man but he’s not a leader. And that’s a problem,” exclaims Senior Labour lawmaker Hilary Benn who was fired after calling on Jeremy Corbyn to quit as party leader. His firing has triggered revolt among Corbyn’s shadow cabinet…

Corbyn, a long-time Euroskeptic who voted against EU membership in 1975, ran a low-key campaign for staying in this time. He didn’t make his first speech on the topic until two months after Cameron announced the referendum, and in his rare media appearances he repeatedly highlighted the EU’s flaws, even while arguing for a “Remain” vote. Swathes of Labour’s traditional heartlands in northern and central England, as well as Wales, voted to leave the bloc.

“There is growing concern in the Shadow Cabinet and the parliamentary party about his leadership,” added Benn, and he appears to be spot on as the 12th cabinet member just resigned…

Jeremy Corbyn’s leadership has been plunged deeper into crisis as a string of shadow ministers quit Labour’s top team saying they had no confidence in his ability to win a general election. As AP reports,

Shadow leader of the Commons Chris Bryant became the latest senior figure to announce he could no longer work with Mr Corbyn, declaring: “We need someone new to lead and unite Labour.”

The party’s influential deputy leader Tom Watson is to hold emergency talks with Mr Corbyn on Monday to “discuss the way forward” after eleven members of the shadow cabinet announced they were resigning – with more expected to follow.

In a statement, Mr Watson said he was “saddened” so many colleagues felt unable to carry on and “deeply disappointed” at the sacking overnight of shadow foreign secretary Hilary Benn which triggered the walkout.
He said: “My single focus is to hold the Labour Party together in very turbulent times. The nation needs an effective opposition, particularly as the current leadership of the country is so lamentable.
“It’s very clear to me that we are heading for an early general election and the Labour Party must be ready to form a government. There’s much work to do. I will be meeting Jeremy Corbyn tomorrow morning to discuss the way forward.” A source close to shadow business secretary Angela Eagle, who has not resigned, said: “She is heartbroken about the position in which the party finds itself and desperately worried we’re failing to connect with communities across the country.”

However, as Bloomberg reports, Corbyn may survive a Labour leadership challenge thanks to his popularity with the party membership, but he has lost authority among many of its lawmakers. Those pushing for him to go fear that whoever replaces Cameron will call a snap election, at which Labour will need a clear position on its attitude to the European Union and a leader who looks like a potential prime minister.

In a letter to Labour MPs, veteran backbencher Dame Margaret Hodge who tabled the no confidence motion warned they were facing a disaster at the polls if they failed to act.
“If a general election is called later this year, which is a very real prospect, we believe that under Jeremy’s leadership we could be looking at political oblivion,” she wrote.
Mr Murray told the BBC: “I think Jeremy Corbyn has to look at himself seriously in the mirror and see if he sees himself walking down Downing Street as being prime minister, whether or not there’s a general election in six months, or in May 2020.
“I think he’s going to find it very difficult to answer yes to those questions – regrettably. He’s a decent human being, a lovely man who I got on incredibly well with, but he just can’t lead the Labour Party and I don’t think the public think he could be prime minister.”