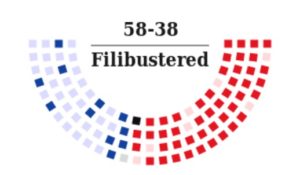 – Meet the Senators Who Earlier Today Voted to Destroy Your Civil Liberties:

Yesterday, I published a post warning about an amendment to be put up for a vote in the U.S. Senate that would severely harm the civil liberties of American citizens. I was very disappointed to see an unusually low amount of reads on that particular post, which came in well below average despite being such an important issue.

Well it turns out John McCain’s amendment 4787 came up for a vote earlier today, and it was stopped by one vote. Yes, by one vote.

So what’s at stake? Let’s review an excerpt from yesterday’s post, Republican Senators Use Orlando Shooting to Push for Increased Government Spying Powers:

U.S. Senate Majority Leader Mitch McConnell set up a vote late on Monday to expand the Federal Bureau of Investigation’s authority to use a secretive surveillance order without a warrant to include email metadata and some browsing history information.

The amendment would broaden the FBI’s authority to use so-called National Security Letters to include electronic communications transaction records such as time stamps of emails and the emails’ senders and recipients.

NSLs do not require a warrant and are almost always accompanied by a gag order preventing the service provider from sharing the request with a targeted user.

Sounds pretty important, but no one seemed to care yesterday. Fortunately, the vote (barely) went the right way, but Mitch McConnell switched his vote to NO at the end just so that he could regroup and push for another vote.

As US News reported:

Privacy-minded senators on Wednesday blocked an amendment that would give the FBI power to take internet records, including browser histories and email metadata, without a court order. But the victory may be fleeting.

Just one vote kept the measure from clearing a 60-vote procedural hurdle, and political arm-twisting may soon result in a second vote. Senate Majority Leader Mitch McConnell, R-Ky., switched his vote to “no” to allow reconsideration in the near future. That made the final tally 58-38, with four senators not voting.

As such, it’s very important that everyone understand where their Senators stand on this issue. Notably, Mr. fake “libertarian” Ted Cruz, who always pretends to care about civil liberties, voted in favor of giving the FBI more unconstitutional powers. There were a few handful of Republicans who voted against it, and they should be commended. They are:

To find out how your Senator voted, click here, and let them know how you feel.