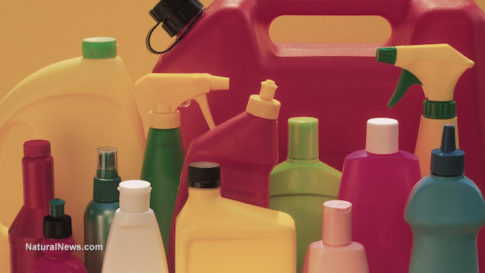 Concerns about the human health effects of perpetual exposure to environmental toxins often get dismissed or ignored by health authorities on the grounds that such chemicals don’t stick around inside the body long enough to cause problems. But a new report by the Environmental Working Group (EWG) – the first of its kind – suggests quite the opposite, and could help explain why rates of cancer and other chronic diseases continue to skyrocket in the developed world.

Researchers from the respected environmental watchdog group spent upwards of a year poring through data compiled from more than 1,000 biomonitoring studies, as well as other research published by leading government agencies and independent scientists, and came to some shocking conclusions. They found that as many as 420 unique chemicals known or suspected to cause cancer, are now being detected in human blood, urine, hair and other tissue samples, demonstrating not only that carcinogens are everywhere, but that they’re also permeating our bodies at an alarming rate.

The bulk of existing cancer research focuses almost exclusively on tobacco, alcohol and sun exposure as the alleged primary causes of cancer, at the exclusion of the literally thousands of chemicals that have been scientifically shown to cause cancer. Even the World Health Organization (WHO) agrees that 20 percent of cancers – or one in five cases – are a result of chemical and/or environmental exposure, not cigarettes, booze and ultraviolet rays.

Reinforcing other ongoing research of a similar nature, like that of the Halifax Project – a collaboration of more than 300 scientists from around the world who are investigating the cancer-causing effects of common chemicals – the new EWG findings are sure to raise some eyebrows within the realm of public health. At the very least, what this research shows is that not nearly enough investigation has taken place with regard to chemical safety, and that the general public faces unknown risks from this lack of proper scrutiny.

“The presence of a toxic chemical in our bodies does not necessarily mean it will cause harm, but this report details the astounding number of carcinogens we are exposed to in almost every part of life that are building up in our systems,” stated Curt DellaValle, author of the report and a senior scientist at EWG.

“At any given time some people may harbor dozens or hundreds of cancer-causing chemicals. This troubling truth underscores the need for greater awareness of our everyday exposure to chemicals and how to avoid them.”

Another issue addressed by the report is the lack of safety research on chemicals in combination with one another. The combined toxicity of multiple chemicals in tandem – a common occurrence in many consumer products – is a major unknown when it comes to long-term health effects, especially in developing unborn children still inside their mothers’ wombs.

“Many of the carcinogens this study documents in people find their way into our bodies through food, air, water and consumer products every day. Dozens of them show up in human umbilical cord blood—which means Americans are exposed to carcinogens before they’ve left the womb,” says EWG president, Ken Cook.

“We should focus on preventing cancer by preventing human exposure to these chemicals.”

As we’ve reported in the past, the federal Toxic Substances Control Act (TSCA) in its current form lacks the necessary regulatory teeth required to accurately assess the safety of chemicals, especially the effects of combined chemical exposure. As it stands, thousands of chemicals have been “grandfathered” into use without having been properly safety tested by the Environmental Protection Agency (EPA), a direct result of TSCA’s failed guidelines.